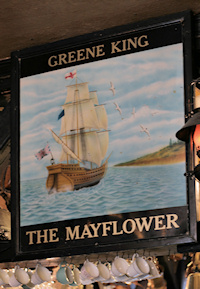 Like a few other riverside pubs that trade on an olde-worlde look, the Mayflower may – or may not be – “the oldest pub on the River Thames,” as it claims.

There has certainly been an inn on this site since at least 1621, when it was called the Shippe. Some sources propose that a tavern was in existence here 70 or even 100 years before this date. It was rebuilt in the early 19th century, but it’s uncertain how much – if any – of the Shippe’s timbers (or indeed the Mayflower’s, as has been suggested) were incor­po­rated into the new structure, which was named the Spread Eagle and Crown.

The Spread Eagle is said to have been popular with labourers constructing Brunel’s Thames Tunnel. Later, and very unusually, it was licensed to sell postage stamps, as the nearest Post Office was a mile away. It sold American stamps too, which may have been more of a gimmick than any kind of conve­nience for sailors.

Sometime in the second half of the 1950s the pub adopted its present name to capi­talise on Rother­hithe’s asso­ci­a­tion with the voyage of the Pilgrim Fathers.

The author­i­ta­tive Buildings of England: London Docklands (now out of print) calls the Mayflower “alas only a picturesque pastiche”, saying that it was rebuilt in 1958 after a wartime bomb had wholly removed its top floor – and presum­ably devas­tated the rest of it.

The excellent Bombsight website, which maps the Second World War bomb census, confirms that a high-explosive bomb fell very close to the pub one night between 7 October 1940 and 6 June 1941. But just how wrecked was the Spread Eagle and Crown? An article by ‘Looker-On’, published in the PLA Monthly a year before the rebuilding is supposed to have taken place, speaks of the pub being “of great antiquity” and describes an old milestone “let into its front wall” (which is still there now) and “a balcony on which hydrangeas thrive in the river air” – making no mention of a missing floor above. ‘Looker-On’ states, quite specif­i­cally, that the pub was given its present name in February 1956 but doesn’t connect this date with any recent recon­struc­tion work – or predict the need for any.

The events of the 1940s and 50s should be within living memory for some readers. The author would be very grateful to hear from anyone with first-hand recol­lec­tions of the pub’s state after the war – or knowledge of the extent of any subse­quent rebuilding work.

UPDATE: Hidden London has now seen the photo­graph below, which shows the state of the pub after the war. 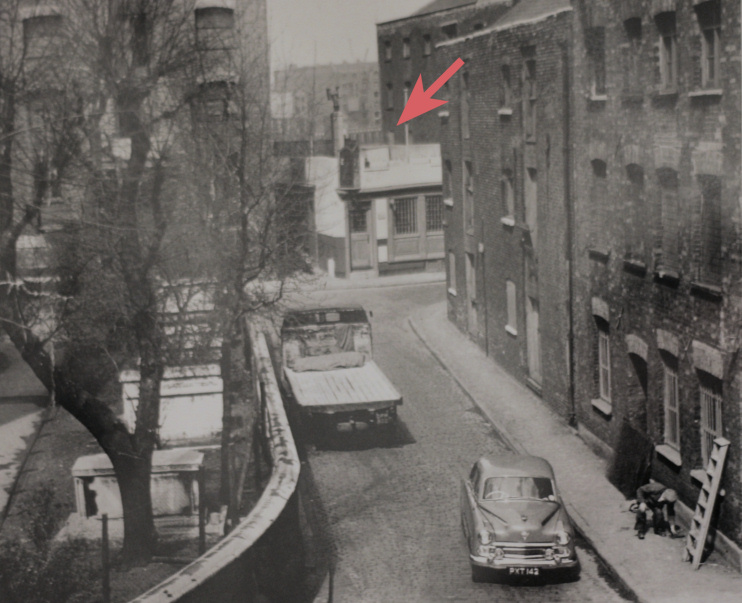