A linear village stretching three-quarters of a mile along Sipson Road, most of which lies just west of the M4 Heathrow spur road 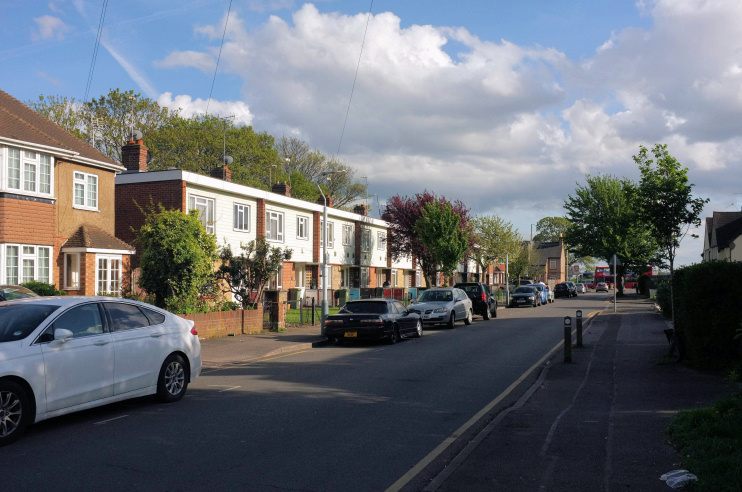 Gravel exca­va­tions have revealed Nean­derthal hand-axes and Bronze Age loom-weights, the latter providing the earliest known evidence of weaving in the London area. A small cremation cemetery from the middle Bronze Age has also been discovered.

Sipson was first mentioned by name in 1214 – as Sibwine­ston: ‘farmstead or estate of a man called Sibwine’ – and there were 14 houses here by 1337. Wheat and rye were grown by the 16th century and an oast house was built for malting and brewing.

At Sipson Road’s junction with Harmondsworth Lane (shown in the photo below) what is now the King William public house began its existence as a Wealden-type hall house, perhaps in the 16th century, perhaps even earlier. It does not appear to have become a pub until little more than a hundred years ago. Nearby, the timber-framed Lanz Farmhouse probably dates from the late 17th century. Its two barns have recently been converted to four homes.

Following enclosure of most of the common land, the village grew slowly from the late 18th century, when Sipson House was built. However, Sipson remained of minor impor­tance in 1836, when Pigot & Co.’s Directory commented that, “The dwellings in this place are but few and those of rather mean appear­ance.” A workhouse stood at Sipson Green until around 1860 and an infants’ school was built soon after this. 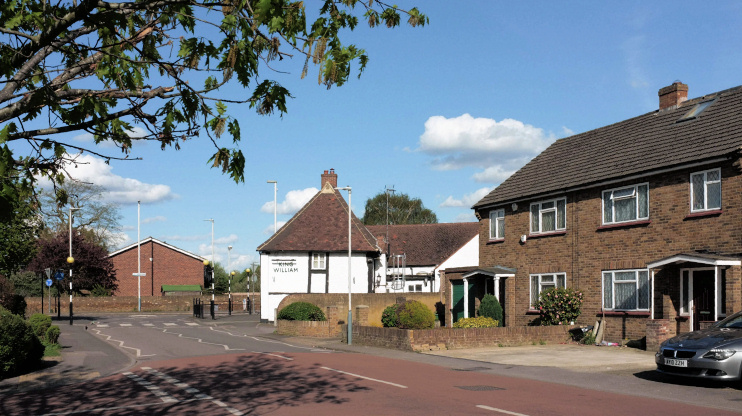 In the late 1890s an old farm was converted into a jam factory, which survived until about 1920. The buildings were taken over by a furniture manu­fac­turer, which switched to making caravans in 1947. The works were replaced by two terraces of council houses in the 1970s.

Surviving Victorian buildings have mostly been converted to new uses. On Sipson Lane, the former cottage hospital (1884) is now a Sant Nirankari mission centre. A Baptist church (orig­i­nally a Gospel Mission hall, 1891) was divided into a dozen flats in 1988, with the Sipson Christian Fellow­ship operating from the east end of the ‘Church Court’ complex. The Crown Inn has become an Indian restau­rant. At the north end of the village the Plough is still a pub. Built in the mid-19th century, it was later extended and altered, as were the hospital and the church.

Over the second half of the 20th century the character of the village was greatly affected by the growth of Heathrow. Sipson House was converted to office use by the British Airports Authority, with only its original façade surviving intact. Sipson is now hemmed in to the south and north by Heathrow hotels, and many local residents work at these estab­lish­ments or at the airport.

Previous proposals for the construc­tion of Heathrow’s third runway would have involved the oblit­er­a­tion of almost all of the village. However, revised plans have shifted the runway south-westwards, instead putting Longford and Harmondsworth in the greatest jeopardy, though some prop­er­ties may still be lost on the western edge of Sipson if the project goes ahead, and the village will inevitably suffer from more noise, traffic and air pollution.

Charles Dickens may have come up with the name for the protagonist of A Christmas Carol while on a visit to Sipson House. However, opinions are divided as to whether the inspiration came from nearby Scroogeall Cottages or from a local shepherd who assured Dickens that his sheep would be able to ‘scrooge’ through a narrow gate.

* The pictures of Sipson Way and Harmondsworth Lane on this page are both modified from original photographs, copyright Derek Harper, at Geograph Britain and Ireland, made available under the Attribution-ShareAlike 2.0 Generic Licence. Any subsequent reuse is freely permitted under the terms of that licence.