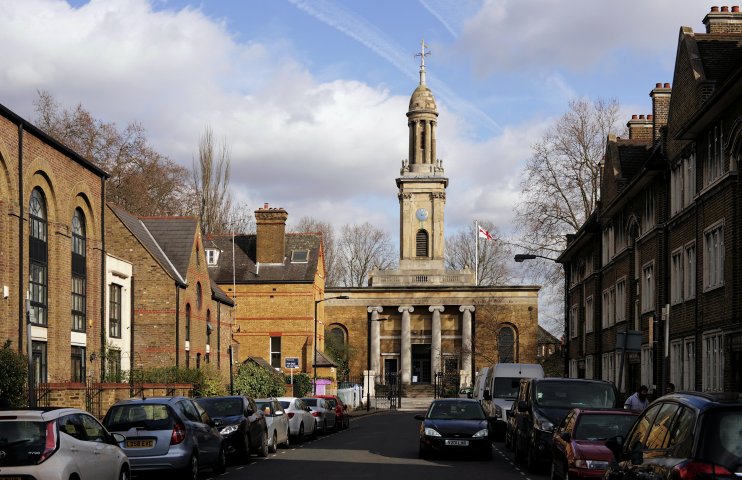 The remains of a mammoth have been found under the streets of Walworth and there is evidence of human occu­pa­tion since the Stone Age. Walworth – ‘the enclosed settle­ment of the Britons’ – grew up between what became Kennington Park Road and the Old Kent Road, two of the ancient roads fanning out from London Bridge to the south coast. Canter­bury Cathedral was a large landowner from the late Saxon era onwards.

Walworth was long a rural area producing fruit and vegeta­bles in abundance; one local nurs­eryman had a list of 320 varieties of goose­ber­ries. In the mid-17th century there were only a few houses along what is today Walworth Road but growing numbers of tradesmen set up shop here as traffic from London increased.

Walworth Common was one of London’s most popular cricket grounds in the early 18th century. After it had been ejected from its pitch at Walworth in 1844 the Mont­pe­lier Cricket Club leased 10 acres of market gardens in Kennington, creating the ground now known as the Oval.

One of the grandest surviving examples of Walworth’s early devel­op­ment is Surrey Square, built in the 1790s by the architect Michael Searles, who also built the Paragon in Black­heath. The math­e­mati­cian and astronomer Charles Babbage – inventor of a fore­runner of the computer – was born in Crosby Row (now Larcom Street) in 1791.

Shown in the photo­graph above,* St Peter’s church in Liverpool Grove was built to a design by Sir John Soane in 1825 to serve the rapidly growing community; over the course of the 19th century, Walworth’s popu­la­tion increased eightfold, reaching 122,200 in 1901.

Great areas of Walworth were rebuilt after the Second World War, notably in the form of the massive Heygate and Aylesbury estates, which were planned in the 1960s and completed in the 1970s.

The Labour Party’s head­quar­ters were in Walworth from 1981 to 1997, when it moved to Millbank. Its Walworth Road building was renamed John Smith House, after the party’s former leader. The building has since been converted into a stylish hostel.

Tony Blair visited the Aylesbury estate soon after Labour’s 1997 election victory but a vote by residents brought a halt to its regen­er­a­tion. After many setbacks and delays, the Notting Hill Genesis housing asso­ci­a­tion was appointed as the council’s devel­op­ment partner in 2014 and construc­tion of new homes under this part­ner­ship began in 2018. The estate’s entire regen­er­a­tion project is expected to finish in 2036, by which time 4,200 new homes will have been built, replacing around 2,700 original homes. The Heygate estate is presently being rede­vel­oped as part of the regen­er­a­tion of the Elephant and Castle, due for comple­tion in 2025.

The Cuming Museum, which was located in the old town hall building, was founded on the personal collec­tion of Richard Cuming and his son Henry, and supple­mented by relics unearthed during exca­va­tions in the Southwark area. The building was very badly damaged by a fire in March 2013, probably caused by roofers using a blow torch. Many exhibits were lost but the best of those that survived are on display at the newly built Southwark Heritage Centre and Walworth Library, which also has a fasci­nating Faraday cage.

Shown in the CGI below, the old town hall is presently under­going restora­tion and is due to reopen by the end of 2023 as a “dynamic cultural community and workspace hub.” 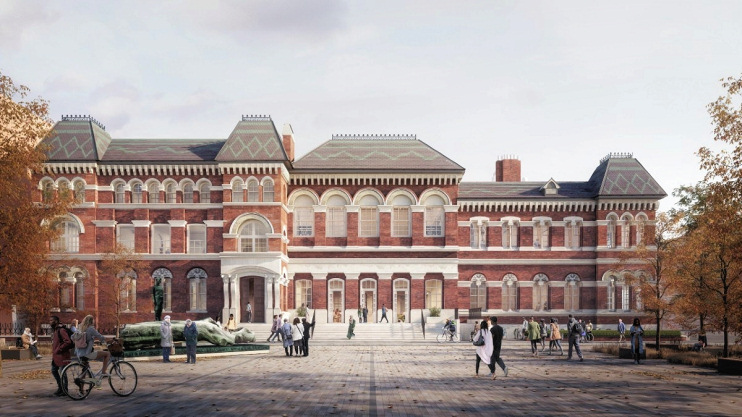 The largest ethnic groups in the area are of white British and black African origin. Formerly noted for its robust working-class community, Walworth (like Newington) is losing its identity as newcomers regard it simply as part of ‘the Elephant and Castle area’.

The comic actor and film director Charlie Chaplin was born in East Street in 1889, the son of music hall entertainers.

* The picture of Liverpool Grove at the top of this article is slightly modified from an original photograph, copyright Peter Trimming, at Geograph Britain and Ireland, made available under the Attribution-ShareAlike 2.0 Generic Licence. Any subsequent reuse of that image is freely permitted under the terms of that licence.