A disadvantaged settlement situated in the far east of the borough of Croydon, set on a steep hillside rising into the North Downs by nearly 200 feet along its north-south axis 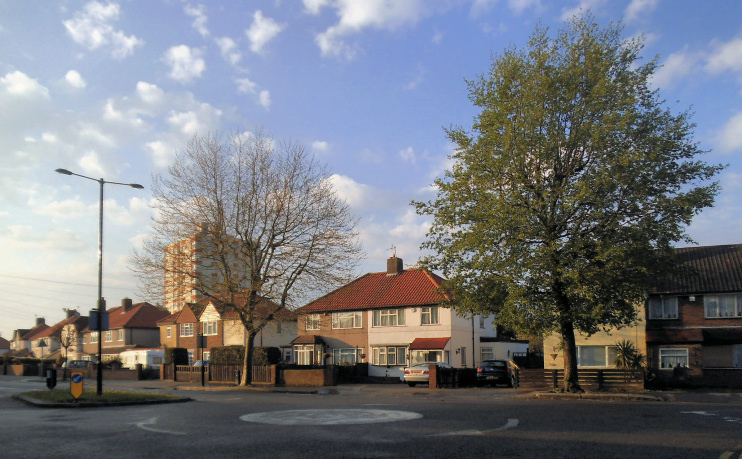 Domesday Book records that, “Albert the clerk holds of the king Addington. Osweard held it of King Edward. It was then assessed at eight hides; now at two. There is land for four ploughs … woodland for 20 pigs.” This was the manor later known as Addington Temple, which covered roughly the area of modern New Addington. It remained as farmland well into the 20th century.

In 1935 the First National Housing Trust acquired 569 acres of Fisher’s Farm to lay out a garden village. Croydon council supported the plan as a way of reducing the over­crowding in its semi-slum urban areas. Just over a thousand homes had been built by the time the outbreak of the Second World War brought construc­tion to a halt.

After the war the need for more housing had become even more pressing, but there was also pressure to protect London’s coun­try­side. The borough took over First National’s unused land and acquired a further 400 acres, while the land west of Lodge Lane was declared green belt. The plan was completed by 1963, but a contin­uing shortage of council homes prompted more construc­tion five years later. This extension – the Fieldway estate – has become the most disad­van­taged part of the district. 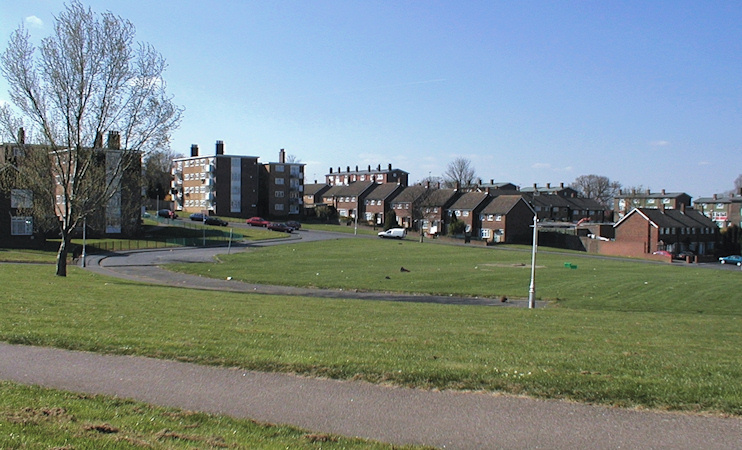 New Addington’s layout included generous open spaces, as shown in the photo­graph above. Some critics dismissed this as ‘prairie planning’ – arguing that the greenswards served only to inhibit a sense of community while providing little in the way of beau­ti­fi­ca­tion or recre­ational facilities.

The centre of New Addington lies 2½ miles south of the nearest train station, at West Wickham, and about 4½ miles from the heart of Croydon. Its inac­ces­si­bility was a major reason for the creation of Croydon Tramlink, which arrived here in 2000.

Fieldway and New Addington are the borough’s first and second most deprived wards and are the principal recip­i­ents of its regen­er­a­tion funds. A 2001 planning document declared the council’s aim to counter the percep­tion that “if you come to live in New Addington, you’ve failed.”

According to BBC research, the New Addington and Fieldway wards voted ‘Leave’ by substan­tial margins in the 2016 EU referendum.

In August 2012 a week-long search for missing schoolgirl Tia Sharp culminated in the discovery of her body in the loft of her grandmother’s house in The Lindens, Fieldway. Stuart Hazell, the grandmother’s partner, pleaded to guilty murder at his Old Bailey trial in May 2013. He was sentenced to life imprisonment.

Croydon council subsequently demolished the house in which Tia had died, and those on either side. Two new council homes were built in their stead and the number of the house where the murder took place was not reused.

* The picture of Homestead Way at the junction of Overbury Crescent at the top of this page is adapted from an original photograph, copyright David Howard, at Geograph Britain and Ireland, made available under the Attribution-ShareAlike 2.0 Generic Licence. Any subsequent reuse is hereby freely permitted under the terms of that licence.