A swarming ‘market town’ located a mile north of Euston 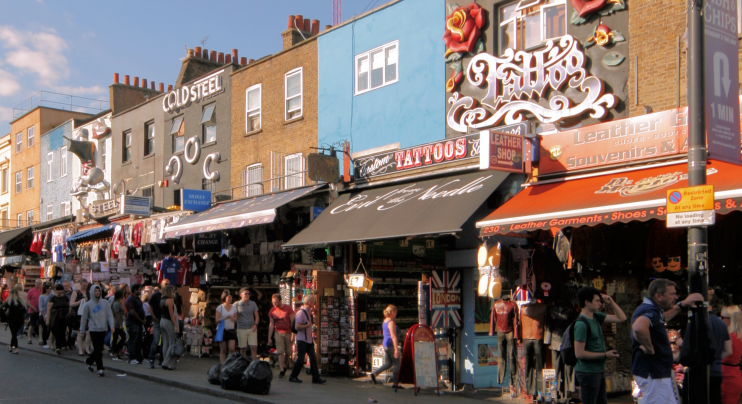 Camden takes its name from Charles Pratt, 1st Baron Camden from 1765 and 1st Earl Camden from 1786, whose family owned the Kentish Town estate in the 18th and 19th centuries. Pratt’s title related to his Chisle­hurst property, Camden Place. An act of parlia­ment of 1788 autho­rised him to develop the land to the east of what is now Camden High Street. George Dance junior devised a plan for a neoclas­sical estate, but the parsi­mo­nious Pratt chose a less ambitious option.

Land to the west of the modern High Street belonged to Lord Southampton, who began to exploit it in the early 19th century.

The arrival of the Grand Union Canal from Birm­ingham in 1814 provided an early spur to growth in the north. Commer­cial activity was forbidden south of Camden’s flight of locks so factories and ware­houses clustered here, with attendant workers’ housing.

In 1822 Camden Town became the first London home of Charles Dickens, when he was ten years old and the district was still surrounded by fields. The now-demol­ished house, at 16 Bayham Street, was probably the model for Bob Cratchit’s home in A Christmas Carol.

In the mid-1830s the Euston–Birmingham railway brought the noise and dirt of sidings and goods yards and Camden Town’s still new gentlemen’s resi­dences were subdi­vided into lodgings for Irish and Italian immi­grants. Camden at that time has been described as the ‘tradesmen’s entrance to the capital’.

Shops and places of enter­tain­ment subse­quently flanked the High Street, including the Camden Theatre, which later became the Camden Palace and is now Koko.

Camden Town tube station opened on what is now the Northern Line in 1907, but this failed to draw wealthier commuters and the pattern of social decline continued in the first half of the 20th century.

Municipal housing replaced some bomb sites and run-down streets after the Second World War, when a Greek-Cypriot community took root here. In the 1960s Camden Town began to regain popu­larity with the middle classes, who refur­bished dilap­i­dated prop­er­ties. Small-scale infilling is of a partic­u­larly high quality in Camden because much of it was done by archi­tects building their own homes.

Camden market began in 1974 in the former Dingwall’s packing case factory at Camden Lock and gained a Sunday licence two years later. The market has since spread to fill every available open space and covered site nearby. The emphasis is on youth-oriented clothing but there are also hundreds of stalls devoted to hand­i­crafts, artwork, music and food. There have been predic­tions that visitor numbers could reach 40 million a year. Govern­ment statis­ti­cians report that Blackpool pleasure beach is Britain’s number one leisure desti­na­tion – but that’s only because they don’t measure Camden market’s hordes.

In 1911 Walter Sickert founded the Camden Town Group of post-Impressionist artists, which included Augustus John, Lucien Pissarro and Wyndham Lewis. A fine example of the school is CWR Nevinson’s grim yet romantic view of The Towpath, Camden Town, by Night (c.1912), in the Ashmolean Museum, Oxford.

The pop-ska band Madness emerged from Camden Town in 1976 and in the mid-1990s the locality became the cradle of Britpop, nurturing bands like Blur, Echobelly and Sleeper, while Oasis made it their London base.

Amy Winehouse lived in Camden Square and frequently performed at Camden Town venues until her death in 2011.