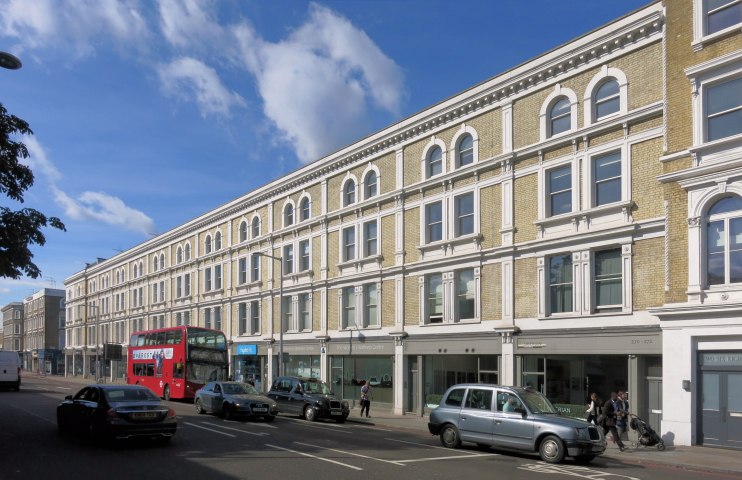 The ‘way from Fulham to London’ was first mentioned in 1372 and it became a func­tional highway in 1410, when the Bishop of London caused Stamford Bridge to be built across Counters Creek, thus connecting Chelsea and Fulham. By this time, hamlets existed at Brompton and Walham Green. In the early 17th century another settle­ment evolved north-east of Stamford Bridge. It was orig­i­nally known as Little Chelsea.

Elsewhere, open fields bordered the road on both sides until the mid-18th century, when spec­u­la­tive builders began to put up clumps of smart houses between the farms. Sections of the road had street lighting from 1806 and paving by 1845.

From the 1840s the Royal Brompton Hospital took shape at the road’s north-eastern end and a cancer hospital, now the Royal Marsden, moved to its present site in 1862. Houses of varying sizes and quality lined much of the rest of the road, together with private schools and asylums and St George’s workhouse, which gained an infirmary in 1878.

Beyond Fulham Broadway, the south-western section of the road was developed in the early 1880s, when builders were descending on Fulham en masse. (See the article on Walham Green for details of devel­op­ments in and around the Broadway.)

From the late 19th century larger shops and places of enter­tain­ment began to appear along the north-eastern part of the road. Chelsea football club came into existence at Stamford Bridge in 1905.

In 1911 Michelin opened its delight­fully ornate UK head­quar­ters (and a tyre-fitting garage) at 81 Fulham Road. The first blocks of upmarket flats were built nearby before the First World War.

In 1916 the theatrical impre­sario Sir Oswald Stoll donated a site next to Chelsea’s ground for homes for injured ex-servicemen and their families. Stoll also led the campaign to raise funds for the homes’ construction.

Following an uneventful period before and after the Second World War, Fulham Road became fash­ion­able in the 1960s, partic­u­larly at the Brompton end. Terence Conran estab­lished the first Habitat store at 77 Fulham Road in 1964. Art galleries, antique dealers, jewellers and fashion houses later moved to Fulham Road from increas­ingly unaf­ford­able Mayfair. In 1987 Conran opened a restau­rant and shop in the immac­u­lately refur­bished Michelin building.

In former Little Chelsea the progres­sive evolution of the old workhouse infirmary culmi­nated in the opening of the £200-million Chelsea and West­min­ster Hospital in 1993. Its vicinity has a pleasing mix of pubs and eateries, inde­pen­dent shops and galleries, and a six-screen cinema. This stretch of the road has been nicknamed ‘the Beach’, for uncertain reasons.

‘The Avenue’ constituted a group of 15 artists’ and sculptors’ studios at 76 Fulham Road from the late 19th century. Alfred Gilbert created ‘Eros’ for Piccadilly Circus at No. 8 in 1893, and John Singer Sargent worked here for 20 years, lending his studio to James Whistler for a while in 1896.

* The picture of Fulham Road at the top of this page is adapted from an original photograph, copyright Des Blenkinsopp, at Geograph Britain and Ireland, made available under the Attribution-ShareAlike 2.0 Generic Licence. Any subsequent reuse is hereby freely permitted under the terms of that licence.