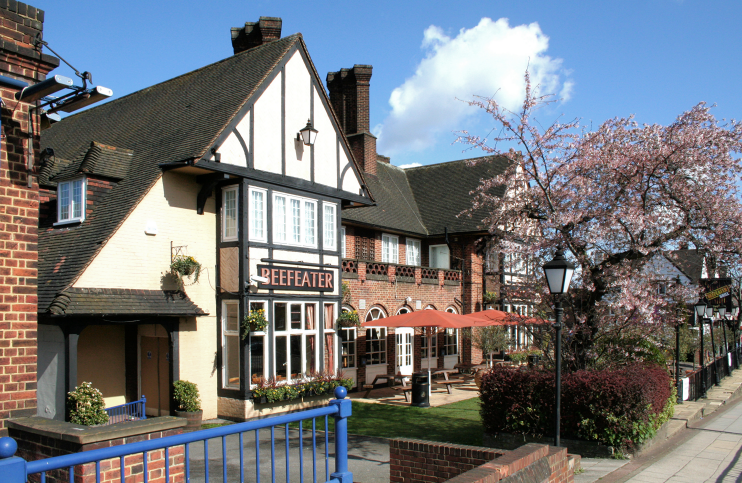 Kenton was first docu­mented in 1231, when it was already a well-estab­lished settle­ment. The name probably meant ‘Cēna’s farmstead’. Kennington’s name has the same deriva­tion, though there’s unlikely to have been any connec­tion between the two Cēnas.

Late in the 19th century Kenton remained an agri­cul­tural village with only the most basic amenities. The ‘gentlemen’s seats’ that peppered so many parts of outer London had not appeared here because of its relative inaccessibility.

Kenton is one of several London suburbs whose centre was shifted by the siting of its railway station. The old village lay in the immediate vicinity of Kenton Grange, at the northern tip of what is now Woodcock Park. The opening of a station on the London and Birm­ingham (later London and North Western) Railway three-quarters of a mile to the west in 1912, and the expansion of Kingsbury’s territory, pushed the village’s midpoint towards Wealdstone.

At first the railway brought more day-trippers than new inhab­i­tants, but growth accel­er­ated after 1925 with the popu­larity of the Harrow and Wembley areas. St Thomas’s Hospital and Christ Church College, Oxford sold their land in Kenton around this time and estates were built with bucolic names like Woodcock Dell and Lyon Farm.

In the ten years to 1931, when its devel­op­ment peaked, Kenton’s popu­la­tion increased twenty-fold. A Metroland brochure of the previous year pronounced that this once small hamlet, “standing on a little-used country road, has now become a thriving colony and the country lane is a busy high road of traffic between Harrow, Kingsbury Green and the main London Road to Edgware.”

When the Trav­ellers’ Rest was rebuilt as the Rest Hotel in 1933 it became the largest public house in Middlesex. Shown in the photo­graph at the top of the page,* it has now reverted to its original name (but without an apos­trophe) as a Beefeater Grill. The fare at such estab­lish­ments may not be haute cuisine but parent company Whitbread has to be be given credit for preserving overlarge pubs in this way when they would otherwise probably be knocked down and replaced by apartment blocks.

Harrow sewage farm was converted into Kenton recre­ation ground in 1936. St Mary’s church, built with money raised by the sale of its namesake in Charing Cross Road, was conse­crated in the same year.

The vicinity of South Kenton station is distinct from Kenton itself. It merges impre­cisely with North Wembley to its south and Preston to its east. The South Kenton and Preston Park estate was laid out from 1927 and was completed soon after the opening of the station in 1933. Several firms of builders were involved in the project, including Fred and Charles Costin, who were respon­sible for most of the houses in Winder­mere Avenue. The estate was provided with its own park, school, shopping parades and pub. The Church of the Annun­ci­a­tion, South Kenton, was completed in 1938.

Until the creation of the London Borough of Brent in 1965, South Kenton was part of the borough of Wembley, while the rest of Kenton lay within Harrow urban district.

Kenton Road has some compact blocks of flats and offices, including one of the district’s few 21st-century buildings – the head­quar­ters of a consulting engineers’ partnership.

Kenton is popular with upwardly mobile members of the Asian community, partic­u­larly those of Indian descent, and has more Hindus than Chris­tians, as well as a signif­i­cant Jain minority, whose local derasar is a converted house on Kenton Road.