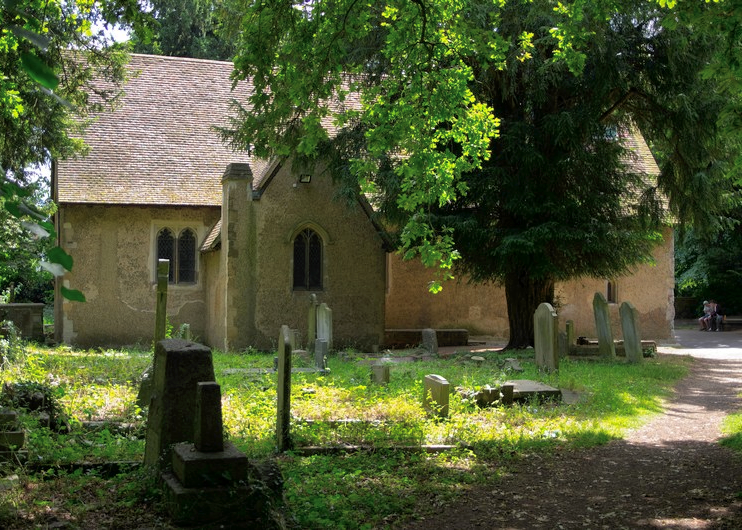 Known in ancient times as Tunworth, Kingsbury was mentioned in Domesday Book as Chinges­berie, which meant ‘king’s manor’, although whatever royal connec­tion it may have had seems to have been lost by the time the Normans arrived.

Shown in the photo­graph above,* the disused twelfth-century church of St Andrew gives an indi­ca­tion of Kingsbury’s signif­i­cance as a medieval settle­ment. It is the only grade I listed building in the borough of Brent.

The settle­ment’s evolution has seesawed between its southern and northern extrem­i­ties. Kingsbury was first a village beside Black Pot Hill (now Blackbird Hill, near the bottom right corner of the map below) and Kingsbury Green was a hamlet one mile to its north. Kingsbury was severely affected by the Black Death. The old village was largely abandoned; a new one grew up around Kingsbury Green and by the late 19th century the original village was almost forgotten.

Victorian devel­op­ment was substan­tial enough for Kingsbury to break away from Wembley in 1900 as an inde­pen­dent urban district. However, the sepa­ra­tion lasted only 34 years and the district remained predom­i­nantly rural until well into the 20th century.

In the 1920s the presence of Neasden station (orig­i­nally called Neasden and Kingsbury) stim­u­lated Metroland growth in the southern part of Kingsbury and the popu­la­tion increased eightfold in ten years.

Imme­di­ately after this came the construc­tion of the last stage of the Metro­pol­itan Railway, from Wembley Park to Stanmore, and the opening of the under­ground station west of Kingsbury Green in 1932, whereupon the town’s centre of gravity shifted once more.

Two churches of St Andrew now share the same church­yard at the south end of Church Lane. The newer St Andrew’s was erected as a result of the massive growth in the area’s popu­la­tion following the opening of Neasden and Kingsbury station. Formerly an Anglo-Catholic church located in Wells Street in the parish of St Maryle­bone, and conve­niently already called St Andrew’s, it was trans­ported to Kingsbury stone by stone in 1933.

The Belfast-born architect Ernest Trobridge lived in Kingsbury from 1915 until his death in 1942 and he designed homes in several distinc­tive styles, often using inno­v­a­tive materials. His most extra­or­di­nary creations, all built in the mid-1930s, were small blocks of flats designed to look like castles, with turrets that disguised chimneys and battle­ments around roof gardens. To learn more about Trobridge, Hidden London recom­mends Brent council’s illus­trated guide, From Cottages to Castles: A walk around Trobridge’s Kingsbury [PDF]. However, because Kingsbury is not a highly desirable area, many of Trobridge’s enchanting homes are not in the condition in which they deserve to be.

After the Second World War, Wembley council built a major housing estate, destroying most of Kingsbury’s historic buildings in the process. Since then, there have been few signif­i­cant alter­ations to the built envi­ron­ment but the demo­graphic profile has changed radically: almost 3,000 residents (more than 20 per cent) of Fryent (Kings­bury’s main ward) are of Indian origin or descent. The ward also has more than 1,000 eastern European residents. 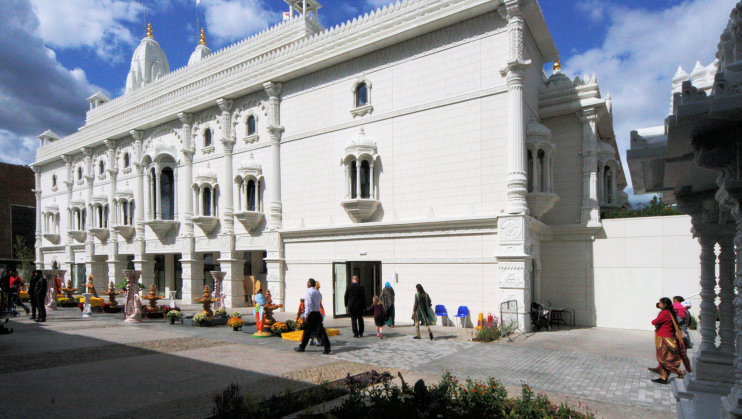 Shown in the photo­graph above, Shree Swami­narayan Mandir Kingsbury opened in August 2014 at the corner of Townsend Lane and Kingsbury Road. The neigh­bouring Shree Mukta­jeevan Swamibapa complex hosts a variety of cultural, artistic, sporting, educa­tional and char­i­table activities.

* The picture of Old St Andrew’s Church at the top of this page is adapted from an original photograph, copyright Julian Osley, at Geograph Britain and Ireland, made available under the Attribution-ShareAlike 2.0 Generic Licence. Any subsequent reuse is hereby freely permitted under the terms of that licence.