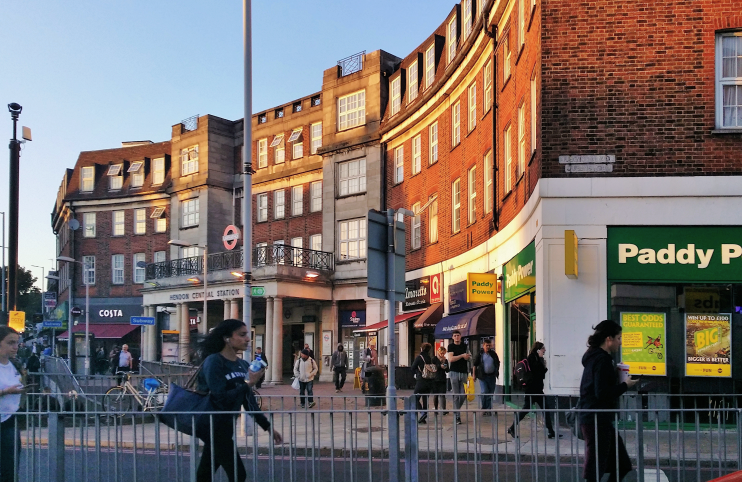 Exca­va­tions have revealed Roman remains from c.ad300 and Hendon’s name (which means ‘at the high down’) was first recorded in 959, when it was a hamlet on the brow of Greyhound Hill.

The ancient manor and parish of Hendon covered over 8,000 acres, mainly woodland that thrived on the heavy soil, with small settle­ments in the clearings. The manor belonged to West­min­ster Abbey from the 10th to the 16th century and, as the forest was cut down, haymaking became the chief activity.

The farmhouse at Church Farm was built around 1660 and was until recently a local history museum. At the time of writing, Barnet council is offering the grade II* listed building for sale on the grounds that it is ‘surplus to requirements’.

During the 18th century Brent Street acquired several grand houses, along with the Bell Inn and a cluster of shops around the junction with Bell Lane.

Hendon railway station was orig­i­nally called West Hendon when it opened in 1868. Modern Hendon took form during the late 19th century as the hamlets around the station, Brent Street and Church End began to coalesce.

A distinct social polarity emerged between the wealthy villas in the Parson Street and Sunny Gardens area and the working-class terraced houses further down the hill.

By the 1890s Brent Street had become Hendon’s main shopping centre. Hendon Central station opened when the London Under­ground extension to Edgware was completed in 1923. Shortly after­wards came the construc­tion of the arterial roads that criss-cross the district, bringing industry and new housing, espe­cially along the North Circular.

In 1931 Hendon was Britain’s most populous urban district. The Hendon technical institute was estab­lished in 1939 and has evolved to become the primary campus of Middlesex Univer­sity.

During the late 1950s and early 1960s the council pulled down and rebuilt much of the housing stock, preserving the social gradient that begins in the disad­van­taged lowlands of West Hendon and rises to the comfort­able undu­la­tions of Holders Hill. Just over 30 per cent of the residents of the Hendon ward are Jewish.

Hendon’s greatest claims to fame are both located on the Colindale side of the M1: the Hendon Police College has been instructing London’s cadets since 1935, while what remains of Hendon aerodrome is now home to the RAF Museum.

* The picture of Hendon Central station, on this page is adapted from an original photograph, copyright David Howard, at Geograph Britain and Ireland, made available under the Attribution-ShareAlike 2.0 Generic Licence. Any subsequent reuse is hereby freely permitted under the terms of that licence.