One of the borough’s poorer quarters, most of West Hendon is separated from Hendon proper by the M1 motorway 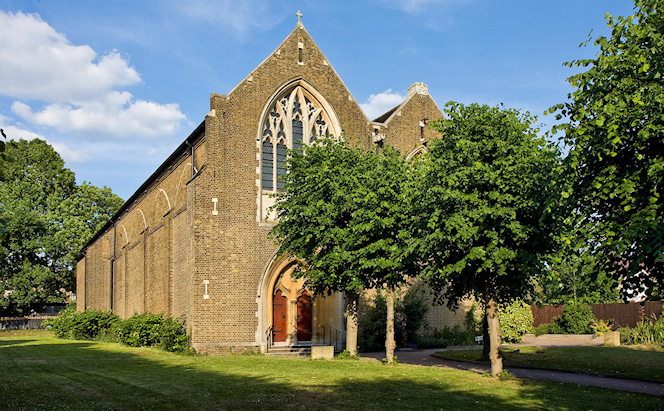 The land here­abouts was once part of Tunworth (now Kingsbury) but – by passing into the ownership of West­min­ster Abbey – came within the parish and manor of Hendon in the late tenth century.

Although the locality attracted visitors following the creation of the Welsh Harp reservoir in the 1830s, no settle­ment existed here until the opening of Hendon main-line station in 1868.

Over the latter part of the 19th century West Hendon evolved as a new suburb, consisting almost entirely of terraced housing. A Baptist mission hall was built in 1885 and Noncon­formists joined Anglicans in contributing to St John’s school, built in 1889, after seeing shoeless children walking to Church End in Willesden. The school has since evolved into St Mary’s and St John’s CE school, now located in Prothero Gardens, central Hendon.

The church of St John the Evan­ge­list held services in temporary buildings until the conse­cra­tion in 1896 of its permanent home, which is shown in the photo­graph above.* St John’s was an early work of the architect Temple Moore and its interior was modelled on the 14th-century church of Austin Friars, in the City of London, employing tall stone arcades without capitals or clerestory. The church was never completed, and consists only of the nave and the south aisle.

In the same year as St John’s was built, the opening of the Schweppes mineral water factory brought further growth to the locality. The bottling plant was located just north of Garrick Road and drew water from an artesian well.

West Hendon Broadway was fully built up by the outbreak of the First World War, although open fields still stretched south to Crick­le­wood railway sidings at this time. The North Circular Road cut across these fields in the 1920s.

In February 1941 a massive explosion killed 80 West Hendon residents and made 1,500 homeless. Although some sources attribute the tragedy to an SC 2500 bomb dropped by the Luftwaffe, Fr John Hawkins of St John’s church tells Hidden London that no one seems certain what caused the explosion, adding that he has spoken with an eye witness who said that an RAF aircraft got into diffi­culty and tried to ditch a land mine in the Welsh Harp but sadly missed.

Much of the surviving housing stock was demol­ished and rebuilt between the 1940s and the late 1960s. The closure of the Schweppes bottling plant in 1980 contributed to the area’s economic decline and West Hendon has since been the focus of various regen­er­a­tion projects. By far the most radical of these is the housing scheme called Hendon Waterside, which will provide more than 2,000 private and afford­able new homes on the banks of the Welsh Harp reservoir. The project is a joint venture between Barnet council, Barratt Homes and the Metro­pol­itan Housing Trust.

In August 2013 the mayor of London waved the Hendon Waterside proposals through, despite the objec­tions of campaigners who argued that the scale of the devel­op­ment will adversely affect the lakeside envi­ron­ment, both aesthet­i­cally and ecologically.

According to the 2011 census, slightly fewer than half of West Hendon’s residents are white and 15 per cent are of Indian birth or descent.

* The picture of St. John the Evangelist, West Hendon, on this page is adapted from an original photograph, copyright Martin Addison, at Geograph Britain and Ireland, made available under the Attribution-ShareAlike 2.0 Generic Licence. Any subsequent reuse is hereby freely permitted under the terms of that licence.