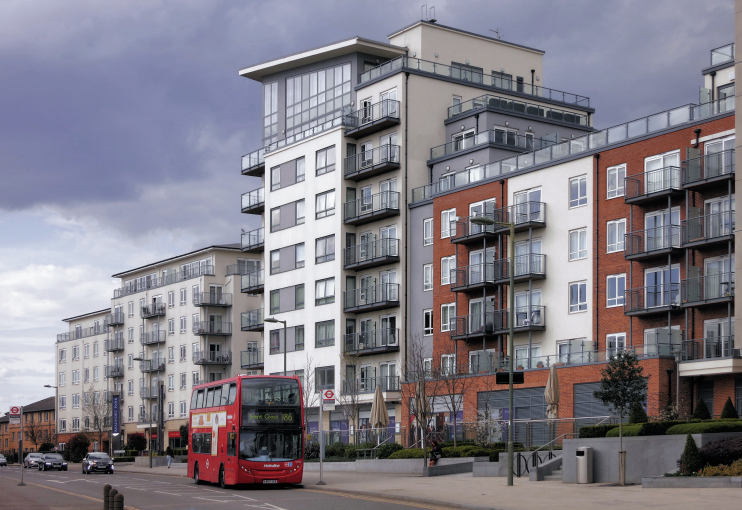 Colin­dale’s name probably derives from 16th-century residents the Colinn family. The settle­ment took root at the end of the 19th century, near the older but now-lost hamlet of Colindeep, which lay in the valley of the Silk Stream, a tributary of the River Brent.

Once consid­ered part of Hendon, but now separated from that district by the M1, the eastern side of Colindale has had a long asso­ci­a­tion with aero­nau­tics. In the years leading up to 1914, aircraft manu­fac­turing and pilot training dominated the locality – and these activ­i­ties multi­plied after the outbreak of the First World War, with asso­ci­ated indus­tries attracted by govern­ment inter­ven­tion. After its estab­lish­ment in 1918, the Royal Air Force flew from Hendon aerodrome, which the govern­ment acquired in 1925.

During the Second World War the aerodrome became a transport, commu­ni­ca­tions and training base, but its unsuit­ability for post-war jet aircraft meant that the last flying units left in 1957, although RAF Hendon didn’t offi­cially close until 1988. The RAF Museum opened on the base in 1972, in two of the aerodrome’s original hangers, which have been supple­mented since by other exhi­bi­tion halls.

The GLC’s Grahame Park estate filled most of the RAF site from the late 1960s. On Aerodrome Road, to the estate’s south, the Peel Centre is the Metro­pol­itan Police’s main training estab­lish­ment. On Colindale Avenue, Public Health England operates specialist and reference micro­bi­ology services and infec­tious disease surveil­lance, including outbreak investigation.

As a desig­nated zone for ‘housing inten­si­fi­ca­tion’, Colindale is presently expe­ri­encing more rede­vel­op­ment than almost any other part of London.

Thousands of new homes have filled Beaufort Park (a 25-acre corner of the former aerodrome, shown in the photo­graph at the top of the page) and many more have been built or are planned for construc­tion in place of run-down council housing and on sites previ­ously occupied by Colindale hospital (rede­vel­oped as ‘Pulse’), the Oriental City shopping centre, the British Library Newspaper Library and on 54 acres of surplus land at the Peel Centre.

Meanwhile, the police training centre itself will be fully rebuilt “to deliver facil­i­ties fit for the needs of modern policing” and to reflect the fact that resi­den­tial training no longer takes place here.

Colindale has histor­i­cally been a rela­tively deprived locality – by the standards of a pros­perous borough – but this is changing as the rash of private housing projects brings in better-off newcomers, whom Barnet council seem to prefer because they pay more council tax and rely less on public services.

Prompted by his familiarity with Hendon aerodrome and Colindale tube station, TE Lawrence (‘Lawrence of Arabia’) adopted the pseudonym ‘Colin Dale’ when writing reviews for The Spectator.

* The picture entitled Bus at Beaufort Park at the top of this page is slightly modified from an original photograph, copyright Des Blenkinsopp, and the picture of what is now called PHE Colindale is adapted from an original photograph, copyright Stacey Harris, both at Geograph Britain and Ireland, made available under the Attribution-ShareAlike 2.0 Generic Licence. Any subsequent reuse is hereby freely permitted under the terms of that licence.