Claude Grahame-White was a motor engineer who became obsessed by aircraft and their possi­bil­i­ties when Blériot made his triumphant crossing of the English Channel in 1909, in a plane like the one shown above.* Grahame-White imme­di­ately travelled to France and taught himself to fly, and soon became a frequent air-race contes­tant, winning many challenge races and flying by night.

He estab­lished an aircraft factory that would ulti­mately employ 3,000 people, founded the first British flying club and – in 1910 – created Hendon airfield on what had been several hundred acres of scrubby farmland. On top of all this he wrote technical manuals and co-authored works of aero­nau­tical fact and fiction with Harry Harper, a Daily Mail journalist.

“The air will be our future highway, affording the fastest transit to passengers and goods; and, ere twenty-five years have passed; a fleet of sea-planes – devouring distance at tremendous speed – should fly from England to America in less than twenty hours. Not for nothing, after centuries of effort, have we conquered the air. Lives have been lost, the victory dearly won; but mankind, in the end, will benefit. First Europe will be linked by airway; then, by degrees, the world.”

In 1914 Hendon aerodrome was requi­si­tioned by the govern­ment and by 1925 it was declared to be the property of the Royal Air Force – much to the aggra­va­tion of Grahame-White, who felt the govern­ment had treated him appallingly. A lengthy compen­sa­tion dispute ensued and he even­tu­ally sued the govern­ment, winning the lawsuit but with little satis­fac­tion at having done so. Grahame-White grew disil­lu­sioned with British flying activ­i­ties and – turning to property invest­ment and devel­op­ment – became a wealthy man and spent the remainder of his life in America and France.

Meanwhile, in the locality now named Grahame Park, aircraft were manu­fac­tured and flown from Hendon aerodrome until 1937, after which its enclosure by suburban housing made aviation imprac­tical, although it operated briefly as a fighter station during the Battle of Britain. From 1940 RAF Hendon became a commu­ni­ca­tions and training base, finally ceasing oper­a­tions in 1957. The Greater London Council began construc­tion of the Grahame Park estate on part of the former airfield in 1969.

Grahame Park was planned as a miniature new town, with municipal flats and houses at its core and private and Ministry of Defence housing on the perimeter. Community facil­i­ties included a library, church, day centre and health centre, all with angular designs.

Plans continued to evolve throughout the project’s imple­men­ta­tion, generally in the direction of down­scaling. Barnet council made some worth­while efforts to prettify the estate in the early 1990s.

However, problems of crime and depri­va­tion persisted and a renewal programme is presently trans­forming much of Grahame Park. Inevitably in such a scheme nowadays, most of the new accom­mo­da­tion is for private sale but homes will also be provided for existing Grahame Park residents, by the housing asso­ci­a­tion Notting Hill Genesis.

The photo below (by Morley von Sternberg) shows Pegasus Court, designed by Peter Barber Archi­tects and forming the eastern side of the new southern gateway square, part of the first phase of the Grahame Park redevelopment. 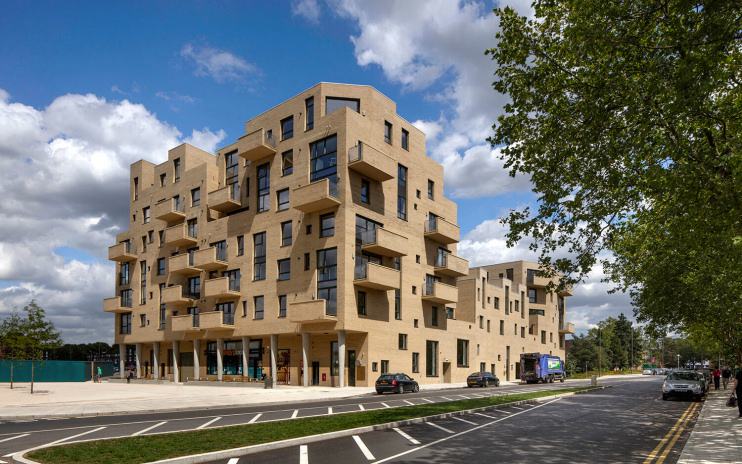 The project, which is one of the largest of its kind in London, was due for comple­tion in 2020 but this target is unlikely to be met because the mayor of London rejected proposals for the the next renewal phase in December 2017, on the grounds that too many social homes would be lost. He called the plan a “classic example of how not to do estate regen­er­a­tion.” Richard Cornelius, leader of Barnet council, was quoted as saying, “Mayor Khan … seems to want to create the sink estates of tomorrow by contin­uing to concen­trate social tenants in one place. This is the wrong approach and we will be consid­ering how to respond.”

Elsewhere on the site of the former aerodrome, London’s Royal Air Force Museum displays more than 100 planes from around the world, from some very early designs to modern jets and military aircraft. Several special exhi­bi­tions are usually in progress too. Admission is free, though you have to pay for a couple of extras, such as expe­ri­encing “all the thrills and exhil­a­ra­tion of powered flight” in the so-called 4D theatre.

Postal district: NW9
Further reading: The In-Betweeners, an excellent article about the regeneration of Grahame Park in the RIBA Journal (September 2015)

* The picture of a Blériot XI at the RAF Museum on this page is adapted from an original photograph, copyright Oren Rozen, at Wikimedia Commons, made available under the Attribution-ShareAlike 3.0 Unported licence. Any subsequent reuse is hereby freely permitted under the terms of that licence.
The biography of Claude Grahame-White is based on an article by Brian Willey, first published in Best of British magazine in July 2013.