A very mixed industrial and residential district situated north of New Southgate and east of Friern Barnet, separated from Osidge by Pymmes Brook 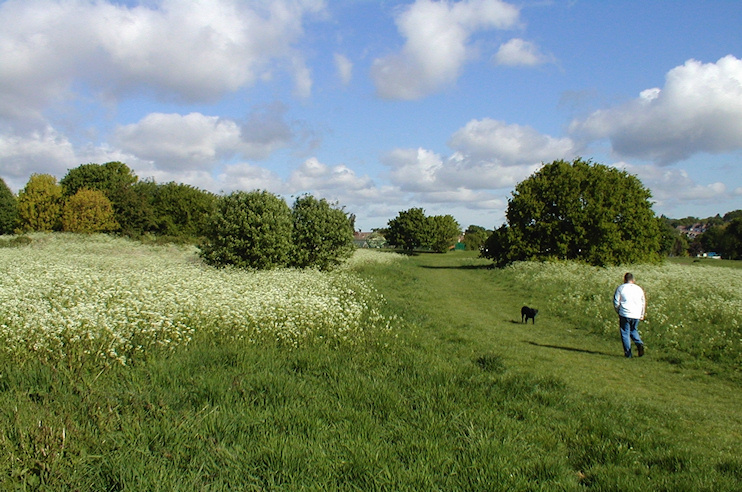 The Great Northern Railway Company opened what is now called New Southgate Cemetery and Crema­to­rium beside its railway line in 1861, with its own siding so that coffins could be brought by train from King’s Cross.

To the north of the cemetery, former sewage works have been converted into a lushly vegetated public open space called Brunswick Park, through which the Pymmes Brook trail runs. It’s shown in the photo above. Brunswick Park primary school sits at the park’s north-west corner.

From the 1920s Brunswick Park saw signif­i­cant indus­trial devel­op­ment on land released by the cemetery company north of Waterfall Road, where Standard Telephone and Cable estab­lished a factory that employed 14,000 at its peak. This was a target for enemy attacks in the Second World War and V1 rockets fell here in 1944.

Northern Telecom (Nortel) manu­fac­tured telecom­mu­ni­ca­tions equipment here from 1989 but left in 2000. The site has since been rebranded the North London business park. A second indus­trial area on Oakleigh Road South has been rede­vel­oped for mixed use, including private and social housing.

The ward of Brunswick Park has a varied socio-economic profile, with some pockets of hardship, but the typical resident is married with children, lives in a mortgaged semi-detached or terraced house and works as a lower level manager for a small business. Twelve per cent of Brunswick Park residents are retired.

Brunswick Park is also the name of a street, ward, school and recreation ground in north-east Camberwell, in the London Borough of Southwark.