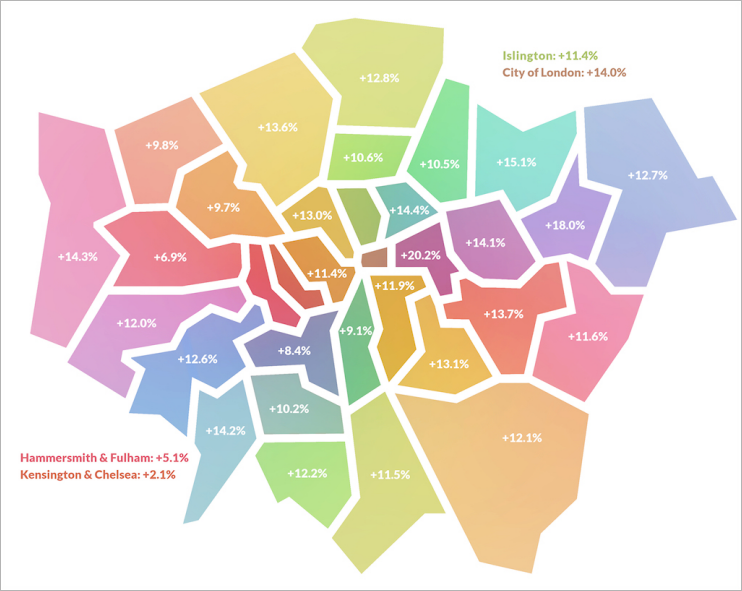 In May 2016 the Office for National Statis­tics released updated popu­la­tion projec­tions for all English local author­i­ties, including the London boroughs.

The ONS issued a statis­tical bulletin focusing on the ten-year period from mid-2014 to mid-2024, making the following points:

Using the full ONS dataset, Hidden London has extracted the projected growth rates for each London borough (plus the City) for mid-2016 to mid-2026 and these are shown in the table below (as well as in the map above).*

Projected growth for 2016–26 is generally slightly slower than for 2014–24, suggesting that some of the most rapid rises may have already taken place (in 2014 to 2016). Never­the­less, forecast popu­la­tion increases such as Tower Hamlets’ 20 per cent and Barking and Dagen­ham’s 18 per cent are still explosive by British standards. In sharp contrast, Kens­ington and Chelsea’s projected two per cent increase is remark­ably sedate.

* Source: ONS Subnational Population Projections, Local Authorities in England: Z1, 2014 based, release date: 25 May 2016. NB The figures for 2016 are themselves projections (based on the mid-2014 estimates). Also, the map at the top of the page is not ‘colour coded’; the colouring is solely an aesthetic enhancement. You can view an enlarged version of the map on Twitter.