One of the most archetypal East End neighbourhoods, situated immediately north of Whitechapel and Stepney 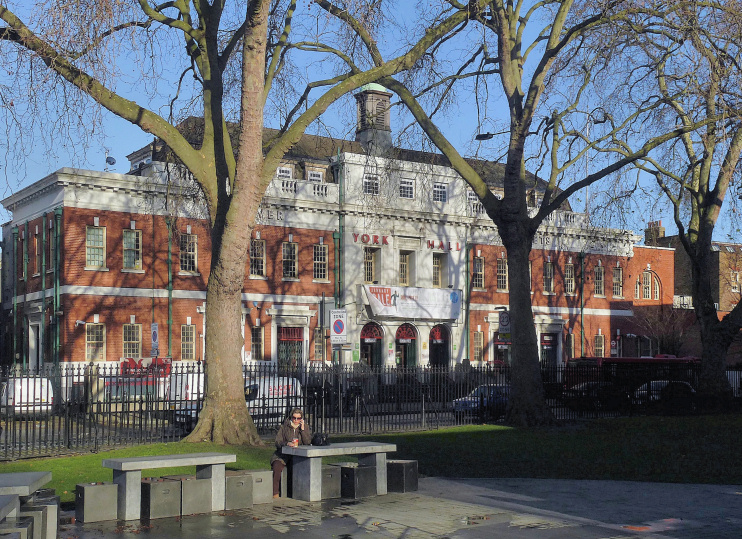 The settle­ment was recorded as Blithe­hale in the 13th century, when a hamlet began to grow around the site of the present tube station. In an early reference to the locality, the medieval ballad of the Blind Beggar of Bednall Green tells of a poor man whose daughter marries a knight for a dowry of £3,000 in gold. The ballad may have been written in the reign of Elizabeth I, though it was subse­quently much revised.

By the 16th century merchants and noblemen were building large houses in the fields and Bethnal Green remained a pleasant country retreat on the outskirts of London until about 1700. There­after, houses began to line Dog Row (now Cambridge Heath Road) and Bethnal Green soon developed into one of the first manu­fac­turing districts in the East End, becoming a separate parish in 1743.

The parish gained fame for chair-making and silk-weaving, though market gardens clung on in the eastern part. During the following century Bethnal Green became one of London’s poorest quarters, described by Karl Marx as a “notorious district” because of its child labour.

From the 1860s phil­an­thropists like Angela Burdett-Coutts and George Peabody built solid, if disheart­ening, tenement housing for the poor. Baroness Burdett-Coutts also sponsored the construc­tion of a spec­tac­ular market hall in Columbia Road, which was never a success and has not survived. However, the street’s open-air market has evolved into London’s busiest botanical bazaar.

The original buildings of what became the Victoria and Albert Museum in South Kens­ington were re-erected on Cambridge Heath Road between 1868 and 1872 and they now house the V&A Museum of Childhood, which draws nearly a quarter of a million visitors annually.

A sundial in Vallance Road recre­ation gardens marks the spot where William Booth began his outdoor preaching, before going on to found the Salvation Army in 1878. The work of erad­i­cating the slums was taken up in 1900 by the newly created metro­pol­itan borough of Bethnal Green, which also built libraries and wash houses.

Shown in the photo at the top, York Hall was opened by the Duke of York in 1929, when its amenities included a laundry, wash house and Turkish baths as well as a public hall. Having been saved from proposed closure in 2004 it is now a leisure centre with a gym, fitness class facil­i­ties, swimming pools and a ‘spa expe­ri­ence’. York Hall is also famous as a boxing venue. 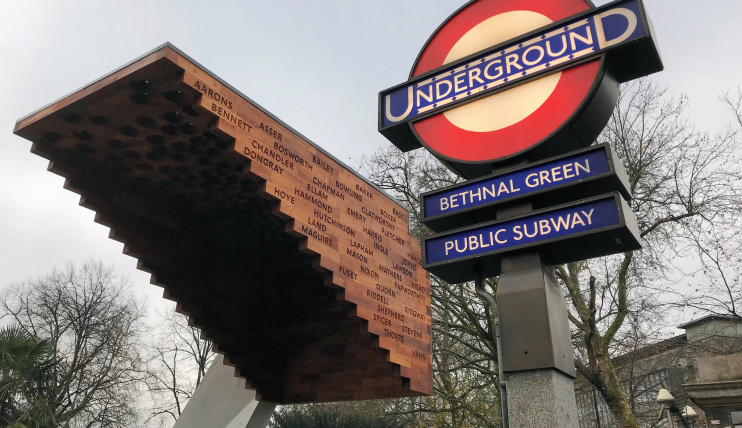 Bethnal Green tube station was the scene of the worst civilian disaster of the Second World War when 173 people, 62 of them children, were killed in a stampede to shelter here during an air raid in March 1943. Shown in the photo above, an award-winning memorial now commem­o­rates the tragedy.

The post-war clearance of slums and bomb sites broke up long-estab­lished neigh­bour­hoods and – in a creative but doomed response to the problem – the council turned to building clusters of high-rise blocks in the hope that old commu­ni­ties could be re-estab­lished vertically.

Bethnal Green is now a chequer­board of council and housing asso­ci­a­tion projects dating from every decade since the late 19th century. Some of the few surviving Victorian terraces have undergone gentri­fi­ca­tion in recent years, with an artistic community forming on the Shored­itch border.

Like Spital­fields to the west, Bethnal Green has long been a first home for new waves of immi­grants, from Huguenot weavers in the 16th and 17th centuries to the South Asian community of today. Over a third of Bethnal Green’s residents are now Bangladeshis.

London’s most notorious post-war criminals the Kray twins lived on Vallance Road in a house nicknamed Fort Vallance. The brothers boxed at York Hall and were regulars at the highly regarded local café E. Pellicci.

* The picture of York Hall at the top of this page is minimally modified from an original photograph, copyright Julian Osley, at Geograph Britain and Ireland, made available under the Attribution-ShareAlike 2.0 Generic Licence. The picture of the Bethnal Green memorial is cropped from an original photograph, copyright Matt Brown, at Flickr, made available under the Attribution 2.0 Generic licence. Any subsequent reuse is freely permitted under the terms of those licences.