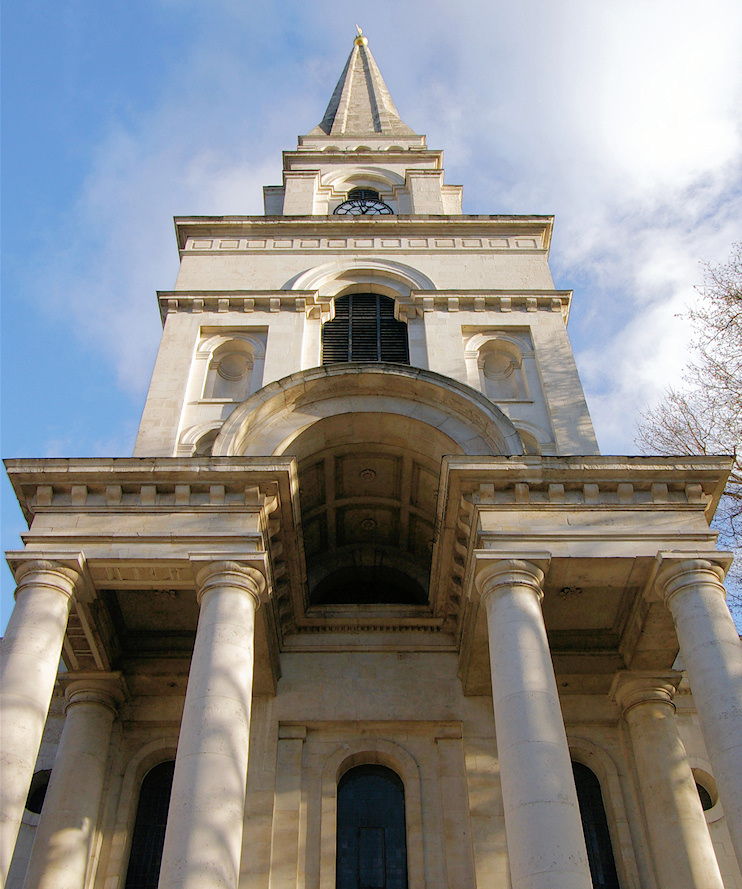 Walter and Rose Brown founded the hospital and priory known as St Mary Spital in 1197. The hospital was closed in 1538 and its buildings were adapted as homes and workshops in the first of a series of changes of use that came to char­ac­terise the district.

Suburban expansion began after the Great Fire of London in 1666 and Spital­fields market was estab­lished in the 1680s. Over the following decades refugees from French religious perse­cu­tion settled in Spital­fields in their thousands.

These Huguenot exiles were attracted by an existing silk-weaving industry, which they expanded greatly. They built numerous chapels, and fine houses that served as both homes and workshops, with large attic windows providing good light for weavers to work by. Fournier Street, shown in the photo­graph below, is an espe­cially impres­sive survivor from this period. 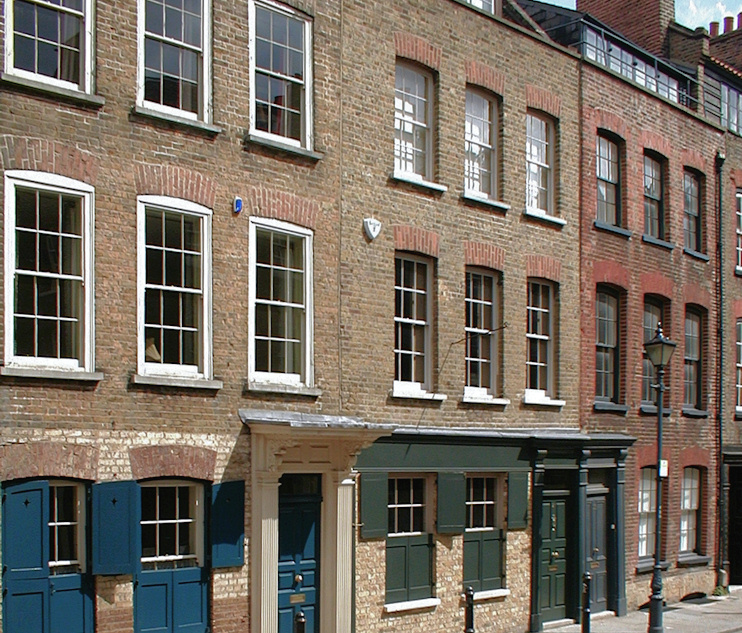 Nicholas Hawksmoor’s Christ Church was conse­crated in 1729 and its 225-foot spire (shown in the photo at the top of the page) remains the area’s landmark.

By the early 19th century the silk-weaving industry was declining in the face of cheap foreign imports and the increas­ingly angli­cised Huguenots dispersed around London. They were replaced by poor Jews from Amsterdam, whose specialist trade was the manu­fac­ture of cigars and cigarettes.

After 1845 Spital­fields’ cheap accom­mo­da­tion attracted Irish immi­grants fleeing their country’s potato famine, many of whom helped to build London’s docks. Phil­an­thropic organ­i­sa­tions began to replace slum housing with model dwellings from the 1860s.

Jewish refugees from the pogroms in Russia formed the next wave of newcomers after the 1880s, bringing skills in tailoring and cabinet-making, and strength­ening Spital­fields’ role as a trading district.

New buildings for the fruit, vegetable and flower market were erected in 1893 and extended in 1928.

By the mid-20th century Spital­fields’ Jews were moving away to suburbs in north and east London. A Bengali community estab­lished itself in the 1960s – although Muslims from the Sylhet district of Assam had been settling here since the late 19th century. The area around Brick Lane has accord­ingly been dubbed Banglatown.

Spital­fields wholesale market moved to a purpose-built site in Leyton in 1991 and its old buildings became home to a Sunday market that began to rival Camden Town for its youth appeal. The City of London (which owns the place) subse­quently remod­elled the western part of the market, which is now a mixed use devel­op­ment with (mostly pricy) retailers and eateries at street level.

The market’s Victorian section, facing Commer­cial Street, has been restored and is now open seven days a week with differ­ently themed stalls each day. There are boutiques and varied service providers all around the market’s perimeter.

Christ Church was restored and fully reopened in 2004 after almost 50 years of closure, and now doubles as an event venue. In recent years surviving weavers’ houses have been renovated and ware­houses have been converted to apartment blocks with galleries and cafés at street level, but behind these conspic­uous devel­op­ments this is still a district of run-down tenements, where over­crowding is high and incomes are low.

The music hall performer Bud Flanagan was born in Hanbury Street in 1896, as Chaim Reuven Weintrop.

The artists Gilbert and George moved to Spitalfields so long ago that at first they heard only Yiddish accents here.

* The picture of Christ Church Spitalfields on this page is modified from an original photograph, copyright Julian Osley, at Geograph Britain and Ireland, made available under the Attribution-ShareAlike 2.0 Generic Licence. Any subsequent reuse is freely permitted under the terms of that licence.