A partially gentrified Victorian suburb separated from Hackney by the River Lea, from which it takes its name 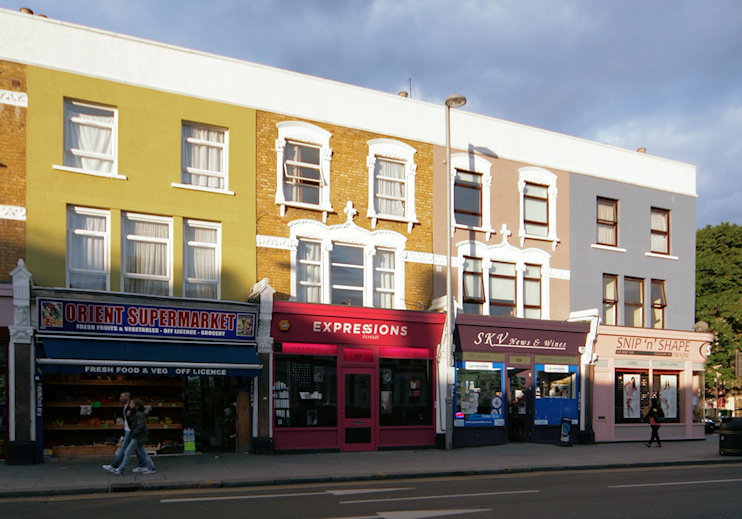 Lugetune, the farmstead or estate by the River Lea, was first mentioned in a document written c.1050. Domesday Book rendered the name as Leintune and it first appeared as Leyton in 1226. The village was later also known as Low Leyton, from its setting on the river’s flood plain; a patch of Leyton Marsh survives near Lea Bridge.

Walnut Tree House, also called Essex Hall, is probably the borough’s oldest structure – though there is no record of precisely when it was built or for whom. Its timber-framed core dates from roughly 1500, with matching wings added later. Shown in the photo below, the house is presently a private members’ club.

St Mary’s church was built in 1658 but, like Walnut Tree House, it has since been much extended and altered.

By the 18th century most of the marshes had been converted to fertile farmland, which was dotted with mansions, espe­cially towards the area now known as Bakers Arms.

There was little growth in the main village until the coming of the railway in the mid-19th century, which brought both indus­trial devel­op­ment beside the Lea and the construc­tion of a lower middle-class dormitory suburb. There­after Leyton’s popu­la­tion doubled every decade for the rest of the century. In partic­ular, its growth in the 1880s was the fastest of any compa­rably sized town in England. The borough built an Ital­ianate-style town hall in 1882 but it quickly outgrew the premises and a new town hall opened next door in 1896. The older structure is now Leyton library; its successor is managed by the LVE char­i­table foun­da­tion and serves as a weddings and events venue, rebranded the Great Hall.

The opening of Midland Road station in 1894 sealed the fate of the big houses in the north of the district and by the 1920s barely a scrap of land in Leyton remained to be built upon. Heavy damage during the Blitz led to wholesale municipal recon­struc­tion after the war, with the addition of tower blocks from 1961 onwards.

Known in the past (espe­cially the third quarter of the 20th century) for the manu­fac­ture of neckties, Leyton has also been home to the factories of Aquas­cutum and Thermos, but manu­fac­turing has declined in favour of service indus­tries over the last few decades. In 1991 Spital­fields market moved to a purpose-built 31-acre site off Ruckholt Road. New Spital­fields has the widest range of fruit, vegeta­bles and flowers of any British wholesale market.

In advance of the 2012 Olympics, the council made various envi­ron­mental improve­ments in and around High Road Leyton. The most imag­i­na­tive aspect of the project was the revamping of 21 shopfronts, some of which are shown in the photo at the top, while more than 150 residents success­fully applied for grants of up to £1000 to spruce up the frontage areas of their homes.

Waltham Forest council has described Leyton as “possibly the most diverse part of the borough” – and as one of its poorest areas. However, gentri­fi­ca­tion is visibly taking hold in many of the Victorian side­streets. In mid-2021 a first-time visitor to Leyton observed: “Every other house has a skip outside and the whole place is buzzing with little inde­pen­dent shops, cafés, old East End types and swarms of young, middle-class couples with new dogs and babies.”

White residents make up around 36 per cent of Leyton’s popu­la­tion, and just over half of these are white British. The other main ethnic minori­ties are of Pakistani, black African and black Caribbean descent.

The average age of Leyton’s residents is 31.7 years, which is rela­tively young. This is mainly the result of the large number of families with dependent children, including a high propor­tion of single-parent households.

Clapton Orient Football Club moved to Brisbane Road in 1937. The ‘Orient’ name had been the suggestion of a player who worked for the Orient Line shipping company, as it fitted the east London location. The club changed its name to Leyton Orient in 1946 and enjoyed its greatest period of success in the 1960s.