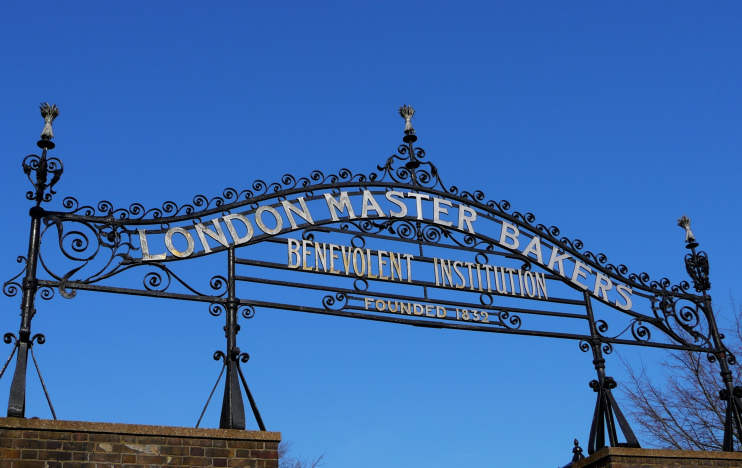 According to the Victoria History of the County of Essex (Volume 6) the estate called Knotts, later the Poplars, may have orig­i­nated in the estate in Leyton and Waltham­stow inherited by William Knott from his father Thomas before 1451. The estate was at least partly broken up in the second half of the 16th century and its various parts passed through countless hands thereafter.

The Knotts estate almost certainly gave its name to Knotts Green, which is located just north-east of the locality now called Bakers Arms (formerly Leyton Corner) and was dominated in the 19th century by Barclay Park, the banking family’s estate.

Leyton Corner’s two grand houses were Leyton Hall on the south side of the junction and the Poplars to the north. With its 17 bedrooms, the Poplars was described as one of the largest and finest houses in Leyton in the latter part of the 19th century. It possessed land­scaped grounds that extended almost up to what is now Clarendon Road (specif­i­cally to what was then the dividing line between the districts of Leyton and Waltham­stow – note the present-day Boundary Road, which runs westward from the other side of Hoe Street), with a green­house noted for its collec­tion of odon­toglossum orchids, among other exotic floral varieties.

Between 1857 and 1866 the almshouses of the London Master Bakers’ benev­o­lent insti­tu­tion were built in an elaborate Ital­ianate style by Thomas Knightley, who also designed St Paul’s church, Westferry Road, around the same time. The homes fill three sides of a quad­rangle encom­passing a well-kept garden, set back from the north side of the Lea Bridge Road. The name of the Rank family of flour millers features promi­nently in the homes’ roll of honour. 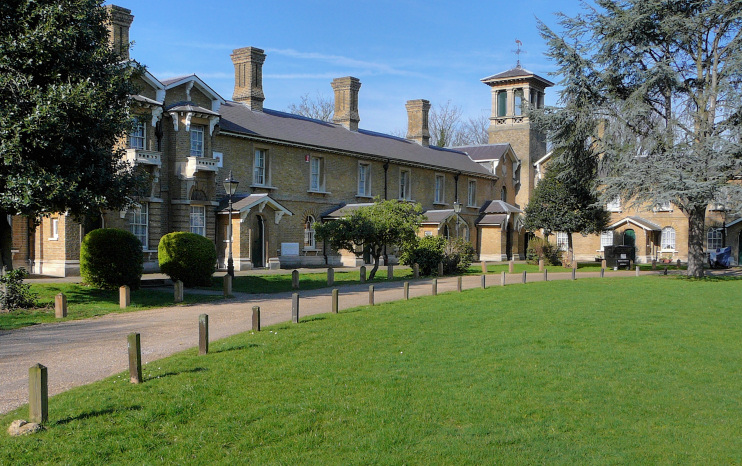 The area began to change rapidly after the construc­tion of the Tottenham and Forest Gate Railway was autho­rised in 1890. In 1892 the Poplars and eight acres of grounds were put on the market as a building estate. Plans for the estate’s layout were approved within a year or two, and the Poplars was demolished.

The railway opened in 1894, but no halt was provided on the Lea Bridge Road. The nearest station was Leyton (now Leyton Midland Road), while Waltham­stow (Queens Road) lay a little farther away in the opposite direction.

Leyton Hall was also soon demol­ished and a horse tramway ran up from Leyton High Road and in both direc­tions along Lea Bridge Road. A tramway depot was sited opposite the Master Bakers’ benev­o­lent insti­tu­tion. Named in honour of the almshouses, the Bakers Arms public house was built at the west corner of the junction.

The present-day street pattern was in full existence by the outbreak of the First World War and the locality was almost entirely built up with terraced housing.

Art-deco influ­enced swimming baths were built in 1934. The main pool was drained and covered over for the winter months, and events such as boxing matches, dances and concerts were held. The Kray twins boxed here and the Beatles and Rolling Stones both performed here.

Trolley buses replaced the trams and in 1952 they were replaced by buses. The old tramway depot became a bus garage – and later a warehouse.

In the late 1960s the Greater London Council converted the almshouses into one-bedroom flats, after a change of heart over their demo­li­tion for road widening. Plans by Tesco to build a super­market on the site were also resisted, with the help of English Heritage, which has ensured that all reno­va­tions have been in keeping with the original design and materials. This included an insis­tence that stolen iron gates be replaced with craftsman-made replicas. However, some internal parts have since suffered from dete­ri­o­ra­tion and would benefit from further invest­ment in the preser­va­tion of this excellent group of buildings.

Foiled in its plan to destroy the almshouses, Tesco instead demol­ished Leyton baths in 1994 and opened an unsightly super­store here.

A short distance to the south, Leyton leisure lagoon became the principal local amenity. This was revamped in 2013 and reopened as Leyton leisure centre.

Though the Bakers Arms pub has been converted to a book­makers, Wether­spoon’s The Drum is located a few doors to its west. A KFC now occupies the site of the tramway depot.

Commis­sioned by Waltham Forest council, a £370,000 regen­er­a­tion project resulted in some stylish improve­ments to the cross­roads’ street-facing prop­er­ties and the public realm in 2013–14.

According to the 2011 census, the resi­den­tial popu­la­tion of the Bakers Arms locality is ethni­cally diverse, with no single group consti­tuting a majority. The most populous sub-group is Pakistani or British Pakistani, repre­senting about 30 per cent of the total. Residents of white British, Polish and other Eastern European, African, Caribbean and Viet­namese heritage are also rela­tively numerous.