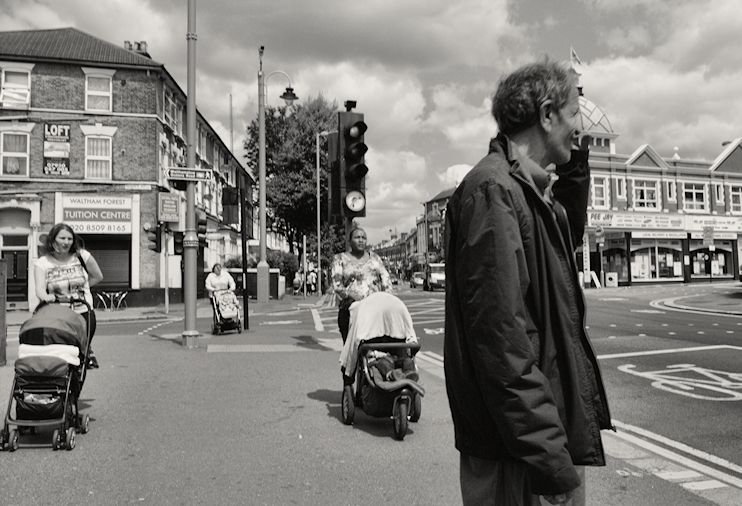 Hoe Street’s existence was first noted in 1697 and its name comes from the Old English hōh, a ridge.

Hoe Street station opened in 1872 at a time when the neigh­bour­hood was still mainly dairy pasture. It is said that trains would wait at the station for would-be passen­gers who could be seen running across the fields. The intro­duc­tion of cheap workers’ fares helped ensure speedy devel­op­ment of the surrounding area in the late 1870s and early 1880s.

Victoria Hall was built in 1887 and became the town’s first cinema 20 years later. The rival Empress was built at the southern end of the street in 1913 by Good Brothers, local builders and impre­sarios. Victoria Hall was demol­ished in 1930 and replaced by the Granada cinema, later the EMD.

Central Parade was completed in 1964, with flats, shops, a lecture hall and a clock tower. The station was renamed Waltham­stow Central when the Victoria line arrived in 1968.

Hoe Street is nowadays almost entirely lined with shops, although it has declined in status since Selborne Walk shopping centre (now the Mall) became the prime retail zone in 1988.

The EMD cinema closed in 2003 and was later acquired by the Universal Church of the Kingdom of God. It has since become a pub and arts space.

At the junction with Selborne Walk, Hoe Street’s most prominent recent addition has been an incon­gru­ously chic pair of blocks, one a hotel, the other a set of apart­ments. Devel­opers Solum Regen­er­a­tion declare that “new invest­ment and ambitious plans for the future will create a vibrant and exciting town centre, … making Waltham­stow a great place to live.”

Hoe Street’s popu­la­tion is ethni­cally diverse, with no single group consti­tuting a majority. The two largest minori­ties are white British and the sub-group that is nowadays offi­cially called ‘Asian/Asian British: Pakistani or British Pakistani’. Islam is the second religion after Chris­tianity. The ward is not affluent; of its 5,000 house­holds, almost half have no access to a car.

Hell on Hoe Street (2002) is one of a series of Walthamstow-based crime novels by former probation officer Jeremy Cameron.