Until recently, an industrial and working-class residential district straddling the River Lea east of Clapton – now being gentrified 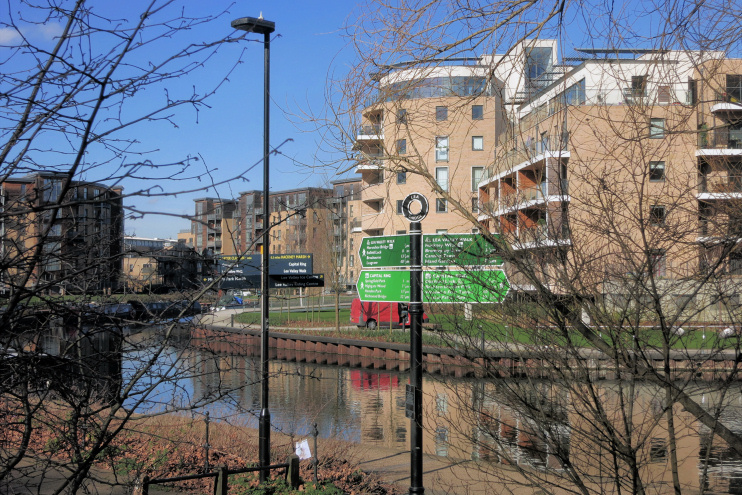 There has been water-related industry here since the time this place was called Jeremy’s Ferry. The first water­wheel was erected in 1707 and this was followed by mills grinding corn (and even pins and needles), and a water pumping station.

The construc­tion of the Lea Bridge turnpike in 1758 improved acces­si­bility to the City and the district became fash­ion­able for a while with merchants and bankers.

The mills presented an obstacle to navi­ga­tion, which was overcome by the opening of the Hackney Cut, from Lea Bridge to Old Ford, in 1769.

On the eastern side of the river, Lea Bridge Road station (opened in 1840 and renamed Lea Bridge in 1871) was the earliest railway connec­tion in the Leyton and Waltham­stow area and soon brought the construc­tion of workers’ housing.

During the latter part of the 19th century filter beds were constructed on both sides of the river and in the 1930s factories replaced agri­cul­tural small­hold­ings. Some of the old utilities and indus­tries have since closed and the Middlesex Filter Beds have become a nature reserve within the Lee Valley Regional Park. The western side of the district remained primarily resi­den­tial, and is sometimes known as Millfields.

With EU funding, Lea Bridge underwent some regen­er­a­tion at the end of 20th century, providing infra­struc­ture improve­ments to its indus­trial estates – but this failed to prevent many busi­nesses from closing or moving elsewhere.

Lately, property devel­opers have been squeezing in upscale apartment blocks wherever planning permis­sion can be obtained. The most recent major project has been The Wharf, a set of four blocks shoe­horned in between Essex Wharf and the river – and shown in the photo­graph at the top.*

Having closed in 1985 as a conse­quence of underuse, a new incar­na­tion of Lea Bridge station opened in May 2016. Waltham Forest council provided £5 million of capital funding for the project. Rail­fu­ture director Roger Blake said: “The initial spark was in 2011 when transport officers in neigh­bouring Hackney council … found there was £5 million funding available from the devel­opers of Stratford City’s Westfield who were keen to expand their rail catchment north­wards up the Lea Valley.” Built at a cost of more than £11 million, the station is ulti­mately expected to serve 352,000 passen­gers a year.

Devel­op­ment of the area around the station has been proceeding rapidly since it opened and there are proposals for much more to come, contro­ver­sially creating an entire new ‘town centre’ here, with several resi­den­tial tower blocks.

A new incar­na­tion of Lee Valley ice centre is due to open by the end of 2022. The neigh­bouring Lee Valley riding centre has an indoor riding school and outdoor hacking facil­i­ties, as well as offering carriage driving and side-saddle tuition.

Just over two-fifths of Lea Bridge’s residents are white and a quarter are black or black British. The Asian community is predom­i­nantly of Indian heritage on the Hackney side of the river and of Pakistani descent in Waltham Forest.

* The picture of the Capital Ring at Lea Bridge is adapted from an original photograph, copyright Des Blenkinsopp, at Geograph Britain and Ireland, made available under the Attribution-ShareAlike 2.0 Generic Licence. Any subsequent reuse is hereby freely permitted under the terms of that licence.