A canalside locality in north Bow, dominated by council-built flats 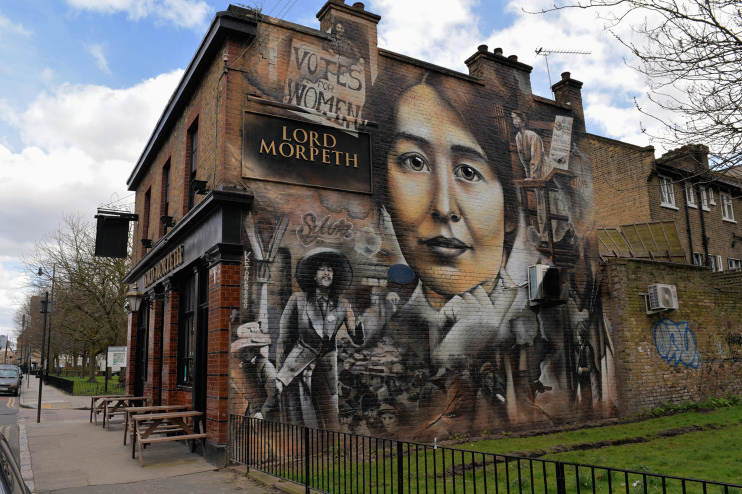 Old Ford’s name was first recorded in 1268, although a ‘Robert of Aleford’ – who was mentioned in 1244 – may have come from here. The ford crossed the River Lea roughly where the ‘Old Ford’ locality name appears on the map below.

In the early Middle Ages this was an important crossing point on the main road from London into Essex – and there is archae­o­log­ical evidence of active commer­cial traffic from the middle of the first century into the fourth century. However, the construc­tion of a bridge at Bow supplanted the less reliable route through Old Ford. This was in part a conse­quence of the meadowland’s vulner­a­bility to flooding, a problem exac­er­bated by the preva­lence of water­mills along the River Lea, constricting its flow.

The Hertford Union canal was constructed on the northern edge of the locality in the late 1820s, linking the Regent’s Canal with the Lee Navi­ga­tion. It was for some years known as Duckett’s cut, after Sir George Duckett, who financed its construc­tion. The canal’s bank was soon lined with wharves, ware­houses and sawmills.

Victoria Park opened to the north of the canal in 1845 and the London and Suburban Freehold Land and Building Society laid out the Victoria Park estate between Roman Road and the canal in the late 1850s. The streets south of Roman Road were built up with compact terraced housing from the mid-1860s, following the opening of a station at Coborn Road (a thor­ough­fare earlier called Cut Throat Lane).

Negli­gence at Old Ford’s water­works was respon­sible for London’s last outbreak of cholera, in 1866. More than 4,000 people died in the ensuing epidemic. The water­works remained in operation until 1891.

During the First World War Sylvia Pankhurst lived in a house that stood next door to the Lord Morpeth, a now-tren­di­fied boozer at 402 Old Ford Road. She led the East London branch of the suffragette movement from a meeting hall adjoining the house. In 1915 part of the hall was fitted up as a ‘cost-​​price restau­rant’ – the first of three afford­able diners to be run by the East London suffragettes. A hundred yards further east along Old Ford Road, Pankhurst opened a mother-​​and-​​baby clinic in a former pub, the Gunmakers’ Arms, which she renamed the Mothers’ Arms. She and her housemate and co-activist Norah Smyth also estab­lished a toy factory on Norman Road (now Norman Grove) to provide local women with jobs that paid a decent wage.

“Deptford, though a great slum, is like an aristocratic suburb compared with the Old Ford Road, though Miss Pankhurst assured us that it was the best part of Bow, and quite country by contrast with the other parts … We noted the leaking roof which the landlord cannot be hurried to mend, a place which cannot possibly admit of any comfort … but Miss Pankhurst said ‘In Kensington or Chelsea you get bricks and mortar, but here we all know each other, and it is very friendly’.”

Unlike neigh­bouring districts, no large-scale rede­vel­op­ment took place in Old Ford during the first half of the 20th century. Coborn Road station closed in 1946 and some houses were demol­ished in 1959 to make way for the East Cross Route, which cut off the area known as Fish Island.

In the early 1960s the London County Council lost patience with Poplar borough council’s failure to redevelop the district and stepped in. The LCC and then the GLC built a series of estates – and Poplar’s successor Tower Hamlets soon joined in too. As a result, most of Old Ford now consists of council houses and tower blocks in a mish-mash of designs and materials. Built on the site of former wharves, recent canalside apartment complexes are more aesthet­i­cally pleasing.

Occupying a former veneer works on Chisen­hale Road, Chisen­hale Art Place is an arts education charity encom­passing a dance space, artists’ studios and a gallery. The latter is open five after­noons a week and produces up to five major exhi­bi­tions a year for emerging or under-repre­sented artists. Across the road from the gallery, Chisen­hale primary school was in the news in November 2022, when protesting pupils and parents resorted to nonvi­o­lent direct action to block Tower Hamlets council’s attempts to dismantle their ‘school street’.

Shown in the photo at the top of this article, the Sylvia Pankhurst mural on the wall of the Lord Morpeth is the work of the Australian-born aerosol artist Jerome Davenport.

* The picture of the Sylvia Pankhurst mural at the Lord Morpeth public house at the top of this page is slightly modified from an original photograph, copyright Loco Steve, at Flickr, made available under the Attribution-ShareAlike 2.0 Generic Licence. Any subsequent reuse is freely permitted under the terms of that licence.