Situated north of Bow, Fish Island was formerly the borough’s largest industrial area but has recently undergone a transformation 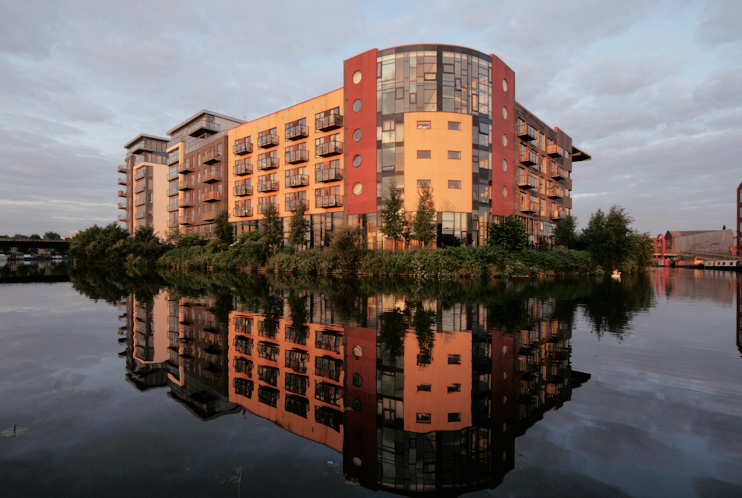 Fish Island is located south of the Hertford Union canal where it joins the Hackney Cut and is so called for some of its street names: Dace Road, Roach Road and Bream Street. Histor­i­cally, this locality was part of Old Ford but the creation of the East Cross Route severed the connec­tion in the late 1960s. Old Ford Road used to continue through the marshes and across the River Lea via the original ‘old ford’. One large house, latterly known as King John’s Palace, stood here until 1863.

In 1865 the Imperial Gas Light and Coke Company bought 30 acres of land as the site for a new works, but instead decided to build these on the east bank of the Lea in Bromley-by-Bow. The company sold the site and the present network of streets was laid out, and filled with small houses and multi-storey factories. Until the late 1990s the island’s largest employer was Percy Dalton’s Famous Peanut Company, at the Old Ford Works in Dace Road.

Fish Island was until recently dominated by waste disposal and recycling facil­i­ties and wholesale and distri­b­u­tion ware­houses, together with some offices. After a number of vacant prop­er­ties fell into disrepair the council permitted their conver­sion to live/work loft apart­ments – and in 2005 the construc­tion of the Roach Point pedes­trian and cycle bridge across the Hertford Union canal halved the length of the journey from Fish Island to Hackney Wick station.

As in Hackney Wick itself, the rela­tively afford­able avail­ability of disused indus­trial premises attracted a community of artists and designers to Fish Island.

H Forman & Son – who produce smoked salmon, other smoked and marinated fish and shellfish – moved to Stour Road after being dislodged from premises that occupied the precise site of the Olympic stadium.

The proximity of the Queen Elizabeth Olympic Park on the opposite bank of the River Lea increased the island’s appeal and the first major resi­den­tial project was the Omega Works at the north-east tip of the island, shown in the photo at the top of this article.

In 2014 planning permis­sion was granted for upwards of 500 homes and 3,000 square metres of commer­cial space at Neptune Wharf, a 6‑acre site north of Wyke Road. The site is now being developed by the venerable housing asso­ci­a­tion Peabody, in part­ner­ship with the house­builders Hill, as Fish Island Village, which is visu­alised in the CGI above. Most of the commer­cial space will be operated by social enter­prise The Trampery. Comple­tion of the third and final phase is scheduled for May 2021.

The present line of thinking among those with local planning respon­si­bility is that the remainder of Fish Island will not be ‘Strat­fordised’ in the fore­see­able future. In an article published in August 2014 Dennis Hone, chief executive of the London Legacy Devel­op­ment Corpo­ra­tion (LLDC), stated a desire to preserve the character of areas such as Fish Island and Hackney Wick, with their artistic commu­ni­ties and “indus­trial feel,” adding: “Building 25-storey, one-bedroom apartment towers is the last thing we want to do across the [Olympic Park’s] surrounding areas.”

However, devel­opers aiming to reha­bil­i­tate run-down local­i­ties have habit­u­ally encour­aged the estab­lish­ment of cultural commu­ni­ties merely as an interim stage – a stepping stone on the journey to gentri­fi­ca­tion. As soon as a dreary place has been glam­or­ised the creative types are deemed to have served their purpose and become vulner­able to displace­ment in favour of more prof­itable tenants. There are indi­ca­tions that this is already happening on Fish Island. In September 2016 scores of artists and start-up busi­nesses were evicted from Vittoria Wharf – a former warehouse that had been declared an asset of community value in 2013 – in advance of its proposed demo­li­tion. The LLDC has since built a foot­bridge on the site to connect Fish Island with new facil­i­ties planned for the Olympic Park.

Channel 4’s Big Breakfast was broadcast from the Lock Keeper’s Cottage at Old Ford Lock from 1992 to 2002. There had been rumours that the show’s founder Bob Geldof would blow up the cottage on the show’s final day but computer tricks were instead used to fake its disappearance.