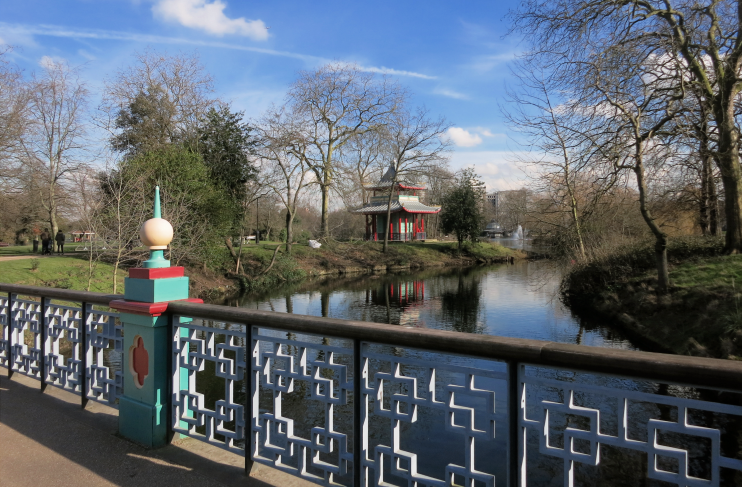 Victoria Park was created to beautify the East End, provide recre­ational space and improve public health. Two possible sites were consid­ered: at Bow Common and in south-east Hackney. The consul­tant planner Sir James Pennethorne recom­mended Bow Common, which he felt was less flat and dull. However, the Hackney option was preferred, primarily because the land was cheaper, although land­scaping proved unex­pect­edly expensive.

There were nurseries and orchards here before, but the fruit trees were cut down for fear that they would provide an incentive to thieving and disorder. Disor­derly gath­er­ings had been a feature of the neigh­bouring Bonner’s Fields, most of which subse­quently disap­peared beneath access roads and housing.

Victoria Park opened unof­fi­cially in 1845, while land­scaping was still in progress and before the lakes had been created. Numerous orna­mental struc­tures were added in subse­quent decades but most have been lost as a result of war-time bombing or neglect. Among the notable survivors are a pair of stone alcoves from Old London Bridge and Baroness Burdett Coutts’s ridicu­lously grand drinking fountain, shown on the right.

The creation of the park stim­u­lated house­building in its vicinity. New streets were laid out and substan­tial terraced houses and detached villas filled the area over the following three decades. Victoria Park had a station on the North London line from 1856 to 1943, with access from the north side of Wick Road. Some housing was replaced after the 1960s by private and council flats but a conser­va­tion area now protects most of the Victorian prop­er­ties, which have been described as ‘forever up-and-coming but never quite making it into the Islington league’. Estate agents refer to the area as ‘Victoria Park village’.

In 1994 Victoria Park became the sole respon­si­bility of the London Borough of Tower Hamlets, which completed a major programme of improve­ments in 2012. The £12  million works included a play­ground, a Chinese pagoda (shown in the photo­graph at the top*) and new flower displays.

The park has hosted political gath­er­ings throughout its history, including Chartist rallies soon after it opened, striking dock­workers’ meetings in the late 19th century and a Rock against Racism carnival in 1978 that was attended by more than 80,000 people (including this author). Nowadays its events tend to be more commer­cial, with music festivals gener­ating around £100,000 a year for the council.

* The pictures of the Victoria Park pagoda and Burdett Coutts fountain on this page are adapted from original photographs, copyright Des Blenkinsopp, at Geograph Britain and Ireland, made available under the Attribution-ShareAlike 2.0 Generic Licence. Any subsequent reuse is freely permitted under the terms of that licence.