Scattered fragments of a lost landmark

The first London Bridge to be built of stone was completed in 1209. Though it frequently needed repairs, it was a remark­ably sturdy structure – strong enough to support an early form of shopping mall until this was removed in the mid-18th century. There­after, 14 alcoves were erected along the roadway, intended to provide shelter for pedes­trians – not so much from the elements but from the perils of the bridge’s ceaseless flow of horse-drawn draffic.

Down below, oversized pilings protected the bridge’s piers while creating treach­erous currents in the Thames. The fall of water at the ebb tide could be as great as six feet. Navi­gating a boat through the arches was known as ‘shooting the bridge’ – a thrill for some Londoners, for others a risk not worth taking. Registers of local burials frequently recorded ‘drowned at the bridge’ as the cause of death. ‘London Bridge was made for wise men to go over and fools to go under’, ran the old saying.

The river-blocking, traffic-squeezing bridge was super­seded in 1831 by a four-pier, five-arch successor, built just a few yards upstream (and since trans­posed to Lake Havasu City, Arizona). Over the course of the following year, the medieval structure was disman­tled and its stones and surviving orna­men­ta­tion were dispersed far and wide. Many of these relics were lost forever but you can still track down a few of them on a wide-ranging tour of modern London.

Four of the bridge’s alcoves survive in London today: two near Cadogan Gate in Victoria Park, one in the courtyard of Guy’s Hospital (now graced by a statue of John Keats) and one in the grounds of Court­lands, a cluster of low-rise flat blocks in East Sheen. The latter is the only surviving feature from the gardens of a mansion that stood here until the 1930s.

There are stones from Old London Bridge outside Wren’s church of St Magnus the Martyr, in Kew Gardens and on the west side of Wandsworth Common, where some have been used in a garden wall and others in the fabric of one of the houses in the same street (shown in the image below). The wall stretches the length of several prop­er­ties, although one ignorant house­holder has demol­ished his section and replaced it with new brickwork. Wandsworth council should hang its head in shame for having allowed such desecration. 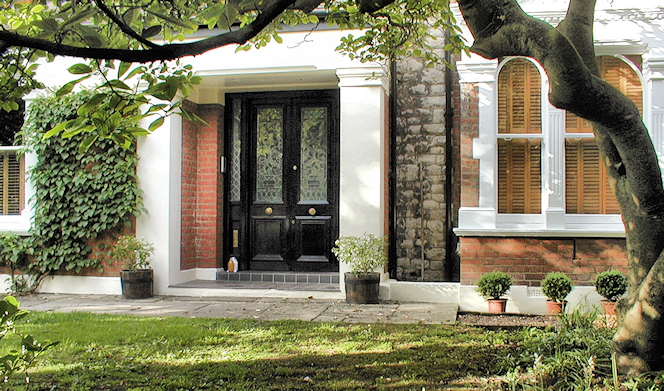 Except for Kew Gardens all the locations mentioned above can be viewed without charge, although some are on private land