The Royal Botanic Gardens occupy the north-western part of the Kew peninsula, across the Thames from Brentford 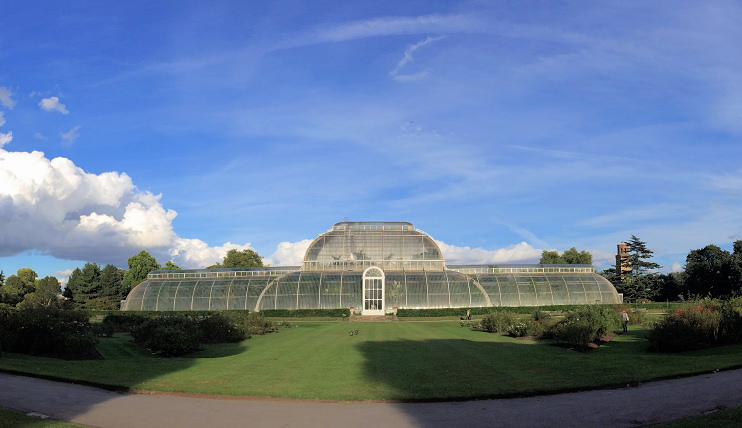 Kew Gardens are a conver­gence of three 17th-century projects: the Dutch House and the White House and their grounds, and the northward expansion of the royal gardens of Richmond upon Thames.

Over the first three decades of the 18th century, and espe­cially during the reign of George II, several prop­er­ties in Kew were acquired or built for members of the royal household either as permanent resi­dences or places of leisure.

The Dutch House became Kew Palace, while the White House was rebuilt as the home of Frederick, Prince of Wales and his wife Princess Augusta. Queen Caroline appointed Charles Bridgeman and William Kent to embellish the landscape and add deco­ra­tive buildings and most of their work was done in the early 1730s.

The octagonal ten-storey pagoda was built in 1762 as a surprise for Princess Augusta, the Dowager Princess of Wales, and Capa­bility Brown remod­elled the gardens of Richmond (formerly Ormonde) Lodge for George III and Queen Charlotte in 1765, but the lodge itself was demol­ished in the following decade.

Queen Charlotte is said to have designed the cottage that was built at the edge of the Old Deer Park in the early 1770s. At this time, Joseph Banks was made director of the gardens and set about importing, culti­vating and then re-exporting consign­ments of exotic plants from Britain’s colonies abroad. Banks set up satellite botanical gardens as far afield as St Vincent in the West Indies and Madras in India.

In 1802 the various gardens of Kew were united (and the White House was demol­ished) and they were adopted as a national botanical garden in 1841. The Victorian directors enhanced Kew’s role by intro­ducing brokerage facil­i­ties for vital commodi­ties like tea, coffee, rubber, quinine and cotton, while resisting attempts to turn the gardens from a scien­tific estab­lish­ment into a pleasure park.

Magnif­i­cent new buildings were erected for the culti­va­tion of plants requiring different climatic condi­tions, including the Winter Garden (now the Temperate House) and the Palm House, which is shown in the photo at the top of this article.* In 1857 Museum No.1 opened on the eastern side of the Palm House pond. Succes­sive new buildings have since buttressed Kew’s status as world centre of botanical research, as well as a breath­taking spectacle.

In 2003 UNESCO declared Kew a world heritage site, in recog­ni­tion of its ‘unique cultural landscape’. With more than 1.6 million admis­sions a year, the gardens are as popular an attrac­tion as West­min­ster Abbey and St Paul’s Cathedral.

George III was sequestered at Kew Palace during his episodes of ‘madness’.

The picture of the Palm House at the top of this page is adapted from an original photograph, copyright Sergei Gussev, at Flickr, made available under the Attribution 2.0 Generic Licence. The picture of Kew Palace is reformatted from an original photograph, copyright kewfriend, formerly at Flickr, where it was made available under the Attribution-No Derivatives licence. Any subsequent reuse is hereby freely permitted under the terms of those licences.