Formerly ‘that Arcadia beyond Moorfields’ and now a multicultural, multi-social and multilingual district, situated three miles north-east of St Paul’s 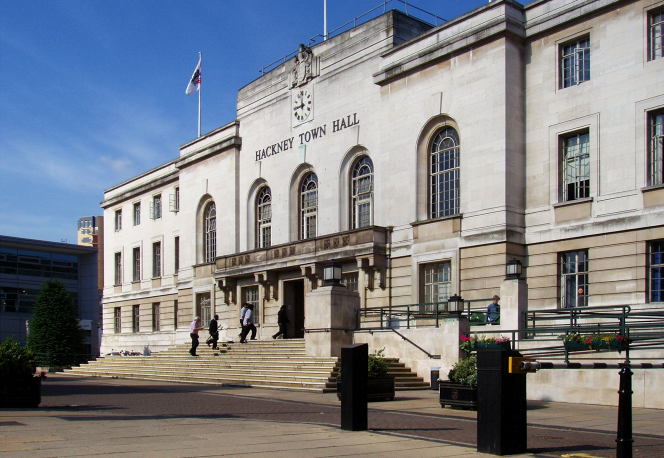 Hackney probably takes its name from Haca, a Danish nobleman, and ‘ey’, an island, for the River Lea and its trib­u­taries once dissected the area. The village had a church by 1275, when wealthy Londoners were already beginning to build country retreats here.

In the 16th and 17th centuries the large, rambling houses of Hackney’s aris­to­crats became a distinc­tive feature of the landscape. Samuel Pepys paid several visits to Hackney, “which I every day grow more and more in love with.”

By the 18th century Hackney’s wealth, which remained remark­able, no longer derived from the presence of noblemen but from merchants, including Huguenots and Jews. Church Street (now the northern part of Mare Street) was lined with shops and houses by the 1720s, which spread outwards over the next century, while the formerly separate hamlet of Mare Street expanded to meet it.

Hackney’s housing stock converged with that of its near neigh­bours at Homerton and Lower Clapton in the first quarter of the 19th century, when entre­pre­neurs began to actively exploit their leases in the area. Streets of substan­tial villas for the middle classes were laid out but the quality of building declined after the arrival of the railway in the 1850s, when larger old prop­er­ties began to be demol­ished to make way for compact terraced housing. Private blocks of flats were built as early as the 1870s.

By the end of the 19th century Hackney was looking increas­ingly like part of the East End, although only London Fields, Homerton and outlying Hackney Wick suffered from wide­spread, entrenched poverty. Commerce thrived on Mare Street, where many of the shops were rebuilt on a grander scale and the Hackney Empire music hall opened in 1901. Soon after this, the London County Council built flats in London Fields and on Mare Street, initi­ating a process that would change the face of Hackney over the following decades.

Indus­trial growth reached a new level of intensity between the wars, as did municipal building, with the borough and county councils each providing thousands of new dwellings. The flat-building programme was repeated after the Second World War, espe­cially on bomb sites. Tower blocks grew higher with each passing decade until the late 1970s, while industry declined. There­after, different condi­tions prevailed and the main trends were towards refur­bish­ment of existing prop­er­ties, the rebuilding of large estates on a less imper­sonal scale and a growing role for housing associations.

Afro-Caribbeans began to replace Jews as the predom­i­nant minority from the 1960s and were later joined by immi­grants from Africa (who, together with their British-born offspring, now consti­tute Hackney’s largest sub-group after white British), south Asia and the eastern Mediter­ranean, making this one of London’s most ethni­cally diverse communities.

With varying veracity, several London districts that once had (or still have) a flawed repu­ta­tion are nowadays touted as ‘hip’. It’s rela­tively true of Hackney.