The north-eastern corner of Bethnal Green 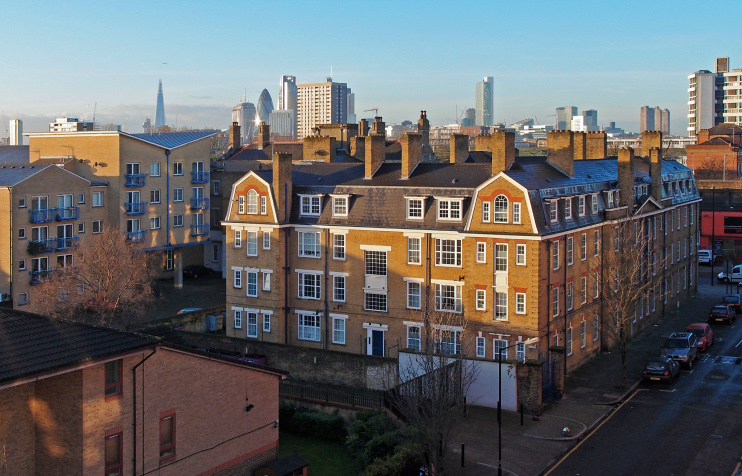 Cambridge Heath has no connec­tion with the univer­sity town; the Saxon who gave his name to the heath was probably called Cent­be­orht, which might as easily have been corrupted to Canter­bury as Cambridge.

The heath lay on a gravel plateau surrounded by marshland and was part of the ‘waste’ of Stepney manor in the Middle Ages. Apart from a house that was described as ‘ancient’ in 1275 there was very little here besides vegetable patches and hayfields until cottages began to appear in the mid-18th century. Later that century a more intense period of building began with terraced houses, factories and chapels.

The locality was almost fully developed during the first half of the 19th century, although a windmill survived until at least 1836. Among the active builders here was the London Society for Promoting Chris­tianity among the Jews, which built Palestine Place.

Most of the residents were poor, espe­cially in the streets around the railway line and the Regent’s Canal, and on Russia Lane. The phil­an­thropic Peabody Trust built its first Bethnal Green blocks here in 1910. In the same year the borough council completed its neo-baroque town hall on Cambridge Heath Road, later adding an art-deco extension.

The communist–socialist controlled council built the Lenin estate in the mid-1920s – and the incoming liberal–progressive admin­is­tra­tion changed the name to the Cambridge Heath estate in 1928. Now it’s called Cambridge Court and is shown in the photo above.* The Municipal Dreams blog has the full story of the Lenin Estate’s ‘Luxury Flats for Social­ists’.

Municipal building continued up to the outbreak of the Second World War – and resumed after­wards. When the former infirmary (latterly a geriatric hospital) closed in 1990, the Victoria Park housing asso­ci­a­tion rede­vel­oped most of the site with houses and flats. Only the hospital entrance block has survived, situated imme­di­ately south of Cambridge Court.

Cambridge Heath remains dominated by blocks of flats, including some recent private builds and conver­sions, mostly targeted at young singles. Several of these projects have replaced former factories and ware­houses, such as the 106 resi­den­tial units built on the site of the Parmiter Street indus­trial centre.

Local commer­cial premises generally operate at the lower end of the market – with one startling exception: the old town hall is now a ridicu­lously splendid hotel.

* The picture of Parmiter Street (Cambridge Court) at the top of this page is adapted from an original photograph, copyright wfmillar, at Geograph Britain and Ireland, made available under the Attribution-ShareAlike 2.0 Generic Licence. Any subsequent reuse is freely permitted under the terms of that licence.