The Blind Beggar and His Dog 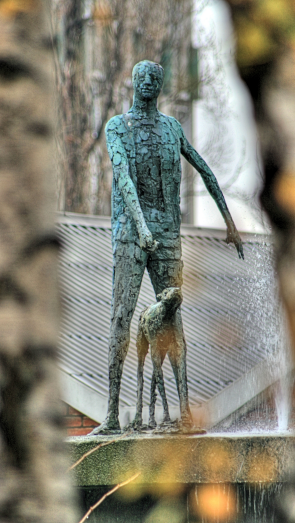 Elizabeth Frink’s bronze statue of the Blind Beggar and His Dog (1957, shown right) adorns Bethnal Green’s Cranbrook estate, which was Berthold Lubetkin’s last major project (but not his best) before his retire­ment. The statue is in the middle of a gated residents’ garden but can be viewed from the Roman Road, just west of its junction with Mace Street.

‘The Blind Beggar of Bednall Green’ was an old ballad included in Percy’s Reliques (1765); the subject of a play by Chettle and Day (1600) and another by Sheridan Knowles (1834). Also known as ‘Bessee the Beggar’s Daughter of Bednall Green’, the ballad may have been written in the reign of Elizabeth I, though it was subse­quently much revised.

The beautiful Bessee had four suitors – a knight, a gentleman of fortune, a London merchant and the innkeeper’s son at the Queen’s Arms in Romford. She told them that they must obtain the permis­sion of her father, the poor blind beggar of Bethnal Green, whereupon they all slunk off except the knight. The beggar consented and gave her a dowry of £3,000 in gold, and £100 to buy her wedding gown. According to Percy’s version, the beggar explained to the guests at the wedding feast that he was Henry, son of Sir Simon de Montfort.

The Blind Beggar public house on Whitechapel Road takes its name from the ballad. The pub was famously the favoured watering hole of the Kray Twins, who in the 1960s ran a criminal Mafia-style operation based at ‘Fort Vallance’, their house at 178 Vallance Road, since demolished.