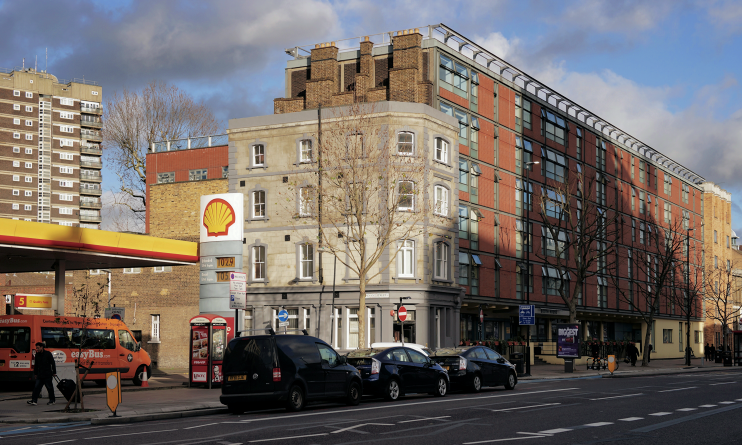 The church of St Mary Matfelon was founded some time in the 13th century and it became known as alba capella or the white chapel. Around 1350 St Mary’s became a parish church – although it survived only a few decades more before being rebuilt – and Whitechapel was the name given to the parish.

The process of indus­tri­al­i­sa­tion began locally in the late 15th century with the estab­lish­ment of construc­tion trades – brick- and tile-making, lime-burning and wood­working – accom­pa­nied by what John Stow later called the “building of filthy cottages.”

Sephardi Jews from Spain and Portugal settled here in the late 17th century, forming the nucleus of a community that would become known as ‘the Jewish East End’. Later, German immi­grants estab­lished a Lutheran chapel and a Roman Catholic church.

Whitechapel Bell Foundry moved here from Hounds­ditch in 1738. It was here that the hour bell of the Great Clock of West­min­ster (known as Big Ben) and Philadelphia’s Liberty Bell were cast – as well as the bell for the 2012 Olympic Games opening ceremony. Sadly, the foundry cast its final batch of tower bells on 22 March 2017 and closed soon afterwards.

Construc­tion of the London (now Royal London, shown in the photo below) Hospital began on the site of Red Lyon Farm in the 1790s, and it later gained fame for treating the ‘elephant man’, Joseph Merrick. A modest suburb evolved in the neigh­bouring streets, but many of the houses have since been replaced by ancillary hospital buildings. There’s a museum of the hospi­tal’s history in the former crypt of St Philip’s church. 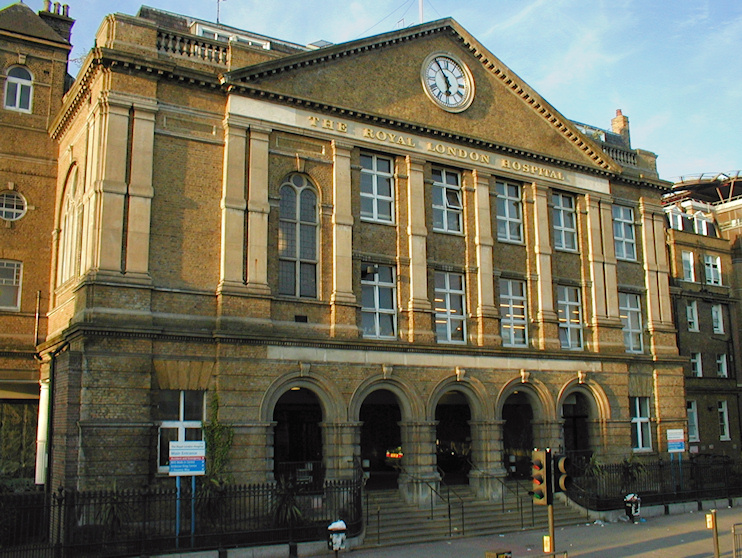 In the late 18th century Whitechapel produced one of Britain’s most illus­trious boxers, Daniel Mendoza, whose fame was so great that he became the first Jew to be permitted to address George III.

Over the course of the 19th century, Whitechapel’s indus­tries lost out to foreign compe­ti­tion while its housing became more over­crowded, espe­cially after an influx of Ashkenazi Jews. One street of 176 houses had 2,516 inhab­i­tants in 1881.

Increasing hardship bred crime and pros­ti­tu­tion, and the latter brought the district its enduring notoriety with Jack the Ripper’s murders in 1888. Stories of white slavery may sound like urban myths, but there is well-docu­mented evidence that this trade took place here around the end of the 19th century with local girls being tricked or threat­ened into working in the brothels of Buenos Aires, Cairo and Constantinople.

Phil­an­thropists worked hard to alleviate condi­tions, estab­lishing every kind of life-improving insti­tu­tion, from soup kitchens to the Whitechapel Gallery, which is still a major cultural resource for the East End.

Although it has its share of post-1960s monstrosi­ties, Whitechapel was spared the wholesale rede­vel­op­ment that took place further east after the Second World War, and thus retains enough dark alleys and cramped courts to attract 100,000 partic­i­pants in Jack the Ripper walking tours every year.

As Whitechapel’s Jews moved to outer north and east London, their place was taken by south Asian immi­grants, espe­cially from the 1970s, and two-fifths of the popu­la­tion is now of Bangladeshi origin; 15,000 worship­pers attended the inau­gu­ra­tion of the London Muslim Centre in 2004.

In advance of the arrival of the Elizabeth line, Tower Hamlets council embarked on a project called Whitechapel Vision, which promised an ‘unprece­dented trans­for­ma­tion’, though this may have been an exaggeration.

Whitechapel has been the focus of dozens of books, mostly devoted to Jack the Ripper, but Iain Sinclair explored its dark side in a different way in White Chapell, Scarlet Tracings (1987).

* The picture of Whitechapel Road (at the junction with Davenant Street, close to the centre of the map above) at the top of this page is slightly modified from an original photograph, copyright Peter Trimming, at Geograph Britain and Ireland, made available under the Attribution-ShareAlike 2.0 Generic Licence. Any subsequent reuse is freely permitted under the terms of that licence.