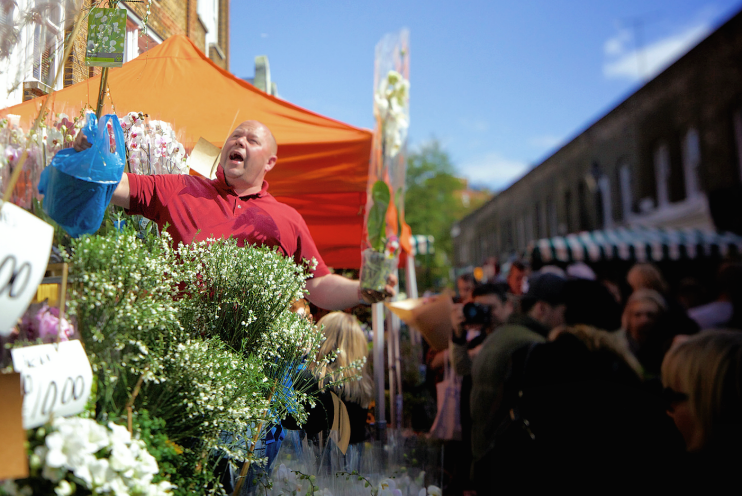 There has been a market in Columbia Road almost since Bethnal Green came into existence and in 1869 the phil­an­thropic Baroness Burdett-Coutts funded the construc­tion of a grand edifice, not unlike St Pancras station in appear­ance, to house the purveyors of afford­able fresh food to the people of the East End.

It was intended that the market should have its own railway line and station but these never mate­ri­alised and the market was not a success. The traders returned to their less-regulated street pitches, which the local residents preferred.

The building was subse­quently put to a variety of uses, including as cabinet making workshops for Jewish immi­grants. The magnif­i­cent Gothic fantasy was demol­ished in 1958 to make way for some of the most ordinary blocks of flats in the East End.

The presence of a strong Jewish community got the street market a Sunday licence, as it did in Petticoat Lane, and as Sunday trading became estab­lished the weekday market died out.

From as early as 1927 various influ­ences pushed Columbia Road towards a special­i­sa­tion in flowers and plants. The market now operates from 8am to 2pm every Sunday, with more than fifty stalls and almost as many cafés, shops, boutiques and galleries – many of a pleas­ingly bohemian character – most on Columbia Road itself but also spilling into Ezra Street.

* The picture of Columbia Road at the top of this page is cropped from an original photograph, copyright Aurelien Guichard, at Flickr, made available under the Attribution-ShareAlike 2.0 Generic Licence. Any subsequent reuse is hereby freely permitted under the terms of that licence.