An increasingly upmarket district that nevertheless retains many council-built flats, situated on the south bank of the Thames, north-east of Wandsworth 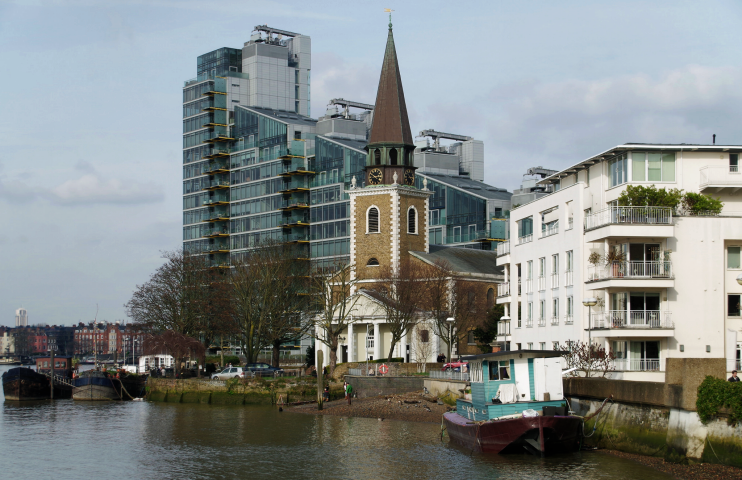 Battersea is one of the oldest recorded place names in the London area. A late seventh-century charter makes reference to ‘Badrices ege’, the island of a man called Badric. The parish church of St Mary was in existence by 1157, although nothing of the original structure has survived.

The Abbey of West­min­ster held the manor at the time of the disso­lu­tion of the monas­teries, when it passed to the Crown, and then in 1627 to the St John family, whose manor house stood east of the church.

Indus­tries were estab­lished on reclaimed marshland beside the Thames, including a shot foundry, a whiting (whitewash) works and a brewhouse at Nine Elms. From the 1740s to 1756, deco­ra­tive enamel boxes were made at York House, and several other manu­fac­turing busi­nesses were equally short-lived.

St Mary’s church was rebuilt in the mid 1770s and is shown in the photo at the top.* Most of the manor house was demol­ished in 1793, and later became the site of flour mills. Away from the river, most of Battersea was used for market gardening, with a few clusters of dwellings around the church and in Falcon Road and Boling­broke Grove.

The coming of the railway to Nine Elms and Clapham Junction and in 1858 the simul­ta­neous opening of Chelsea Bridge and Battersea Park prompted devel­opers to lay out estates of reason­ably priced housing for the middle classes all along the route to Clapham Common. Shortly after­wards, however, Battersea was divided up by an increasing number of railway lines and as a result property prices dropped, with some of the larger houses being subdi­vided to allow occu­pa­tion by ‘persons of humbler circumstances’.

New stations were opened at Battersea Park and Queen­stown Road and grids of terraced cottages were laid out, including in the 1870s the Shaftes­bury Park estate, the work of the same phil­an­thropic company that later built Queen’s Park.

By 1871 the popu­la­tion of Battersea had increased almost tenfold in 40 years and it tripled again before the end of the 19th century, when most of the residents were skilled artisans employed in local service indus­tries. The Latchmere estate of 1903 was the first to be built by an London County Council borough.

Blocks of municipal flats replaced much of Battersea’s Victorian housing before and for several decades after the Second World War. The most unspoilt part is the old village, south of the church.

In recent years, much of the riverside has filled with luxury apartment complexes, of which the most dramatic is the Montevetro building, which is (all too clearly) visible behind the church in the photo at the top. Price’s candle factory, which took the place of York House, has been converted into flats.

The Northern line extension to Battersea Power Station is expected to open in 2020.

Battersea was the birthplace of the jazz pianist George Shearing and the TV personality Michael Aspel. Other former residents include the author GK Chesterton and the naughty artist-craftsman Eric Gill.

* The picture of St Mary’s church at the top of this page is minimally modified from an original photograph, copyright Matt Buck, at Flickr, made available under the Attribution-ShareAlike 2.0 Generic Licence. Any subsequent reuse is freely permitted under the terms of that licence.