A mixed-use riverside area situated between Battersea Park and Vauxhall, presently being redeveloped with a forest of upmarket apartment blocks 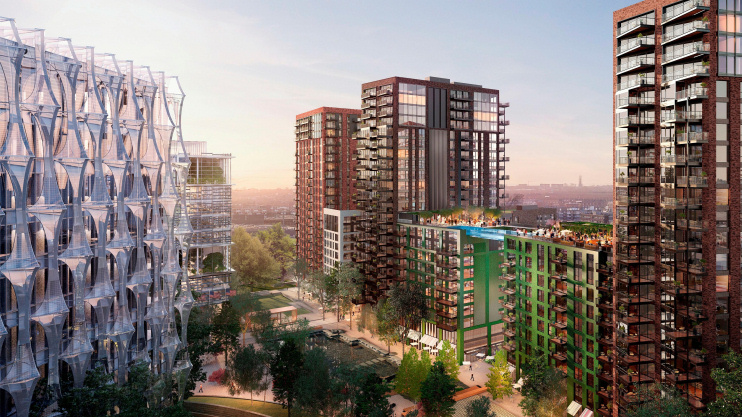 There was a IX Elmes Farm here in 1646 and agri­cul­ture continued to dominate the riverside landscape into the 19th century, with market gardens growing asparagus and other vegeta­bles for the London markets.

In 1838 the London and Southampton Railway Company opened its terminus at Nine Elms. The line was extended to Waterloo in 1848 and Nine Elms became the site of a goods yard and loco­mo­tive works. A gasworks was built and in 1865 this was the scene of the largest explosion in 19th-century London – a million cubic feet of gas ignited and eleven men were killed in the blast.

The neigh­bouring housing was inevitably cramped and grimy and there was wide­spread poverty among the residents.

In 1914 the Women’s Freedom League estab­lished the pioneering Nine Elms Settle­ment in Everett Street, serving children with dinners of vege­tarian soup and large slices of pudding, which they could either eat there or take home.

From 1933 Battersea power station was built on the western side of Nine Elms. Sir Giles Gilbert Scott’s structure has a steel girder frame and exterior brick cladding and is said to be the largest brick building in Europe. It was actually two power stations, the second of which was not built until 1953, when the third and fourth chimneys were added. Following a progres­sive run-down, the power station closed in 1983 and was there­after repeat­edly touted for conver­sion to some kind of major leisure desti­na­tion, with a succes­sion of investors failing to deliver on their extrav­a­gant promises for the reno­va­tion of the structure itself and enhance­ments to the surrounding area.

In 1974 Covent Garden’s flower market and fruit and vegetable market moved to Nine Elms, taking over the site of the north and south railway goods depots. New Covent Garden now has more than 200 busi­nesses employing 2,500 people, and claims to supply 40 per cent of the fresh fruit and vegeta­bles eaten outside of the home in London and to be used by three-quarters of London florists. 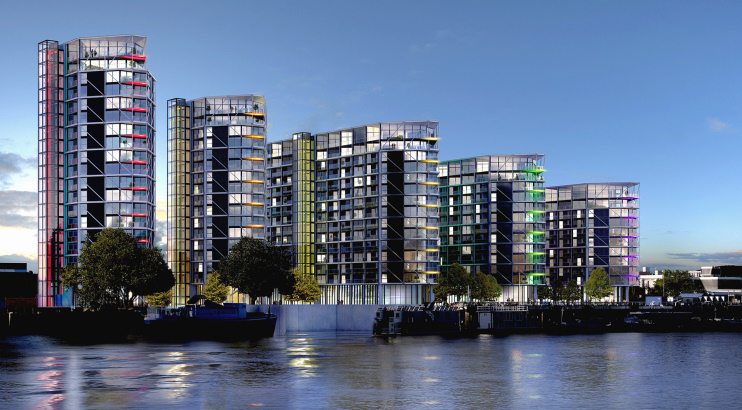 Waterside apartment complexes have recently added an upmarket resi­den­tial aspect to Nine Elms, notably in the form of the six ‘pavilions’ of Riverlight (CGI shown above). Away from the shoreline, the area’s numerous depots and ware­houses have been elbowed out to make room for pricy mixed-use projects.

The most high-profile devel­op­ment is the new American embassy – which opened in January 2018 – and the surrounding Embassy Gardens estate, which is shown in the CGI at the the top of this article, with the embassy itself on the left. President Trump described Nine Elms as a “lousy” and “horrible” location for the embassy. 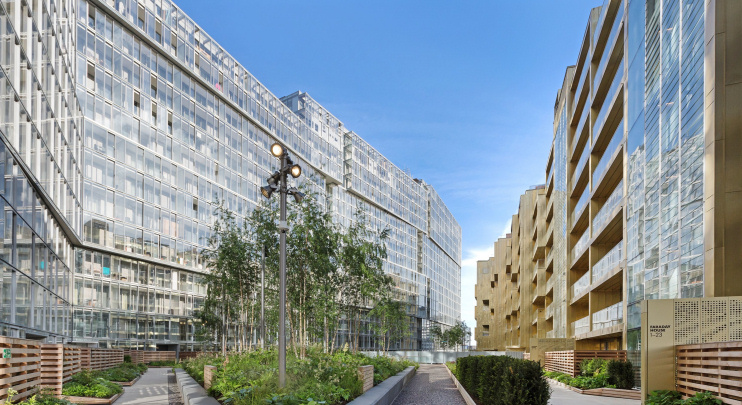 Despite the erstwhile desire of Chelsea football club to relocate here, Battersea power station has been rede­vel­oped as a giant block of flats, tightly hemmed in by yet more blocks of offices, shops and homes, in a Malaysian-owned scheme that may not be completed until 2023. The £8 billion project will include a six-acre riverside park. Aspects of the devel­op­ment have been described in the Archi­tects’ Journal as “grim, dire and dystopian” – but Faraday House, shown on the right in the CGI above, won a RIBA London Award in 2018.

Northern line stations opened at Nine Elms and Battersea Power Station on a new branch from Kennington in September 2021.

Battersea power station’s status as an iconic London landmark was bolstered in 1977 when the cover of Pink Floyd’s Animals featured a giant pig flying between its chimneys.