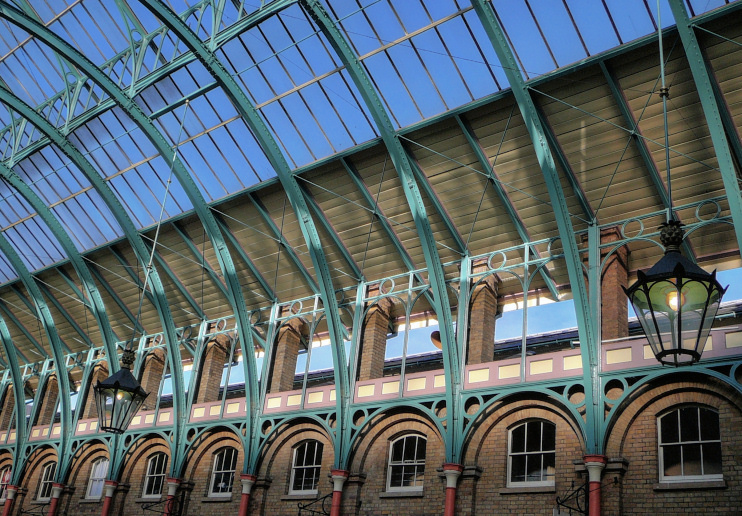 It is generally asserted that the name is a corrup­tion of ‘convent garden’ but it is quite possible that ‘covent garden’ was the original version (as ‘convent’ derives from the Anglo-Norman covent) and that the name has always been rendered this way, at least in spoken form.

The Romans did no more than pass through here but Saxons lived in the area after they estab­lished the settle­ment of Lundenwic, which flour­ished from ad600. After 900, Viking attacks prompted the Saxons to move back within the walls of the City of London and there was little habi­ta­tion here until the foun­da­tion early in the 13th century of the Bene­dic­tine convent of St Peter, Westminster.

Following the disso­lu­tion of the monas­teries, the Bedford family acquired the land, which remained in agri­cul­tural use until the fourth Earl of Bedford obtained a licence from the Crown in 1630 to lay out an estate here. This repre­sented quite a coup, as requests for such licences were generally being refused at this time.

Inigo Jones laid out a disci­plined grid of streets around St Paul’s church and a central piazza. At first the highest class of citizens made their homes in Covent Garden but the area’s universal popu­larity proved its undoing. Coffee houses, taverns, theatres and traders of all kinds attracted throngs of Londoners and the aris­to­crats beat a retreat, leaving ever more dubious char­ac­ters in their wake.

Even the vice trade was no match for the trade in flowers, fruit and vegeta­bles that dominated Covent Garden from the 18th century. The market buildings of the present-day piazza were erected in 1830 and roofed over in 1870. Neigh­bouring slums were progres­sively cleared and replaced by ‘model’ housing for the working classes.

To escape the traffic conges­tion of post-war London, the wholesale market relocated to Nine Elms in 1973. The Greater London Council planned to demolish the market buildings but an exemplary community campaign brought a change of heart that resulted in their refur­bish­ment in 1980 as a retail shopping complex (shown in the photo­graph at the top of this article).

The rede­vel­op­ment succeeded beyond the wildest dreams of its propo­nents and Covent Garden is now one of London’s busiest desti­na­tions for shopping trips, dining out and general entertainment.

The resi­den­tial popu­la­tion has recovered as run-down old homes have been modernised, although the area retains a broad social mix, with many people still renting from the council or housing asso­ci­a­tions. Small busi­nesses have been drawn in, espe­cially those operating in new media sectors.

The poet Andrew Marvell lived on Maiden Lane, where the artist JMW Turner was born above his father’s barber’s shop in 1775.

James Boswell wrote The Life of Johnson while living on Great Queen Street, which was also home to the dramatist Richard Brinsley Sheridan and the poet William Blake.

Among the many films that have used Covent Garden as a backdrop, the most distinguished are 1964’s My Fair Lady and 1972’s Frenzy. The latter evocatively captures the fruit and vegetable market in its final days – a world away from the scene today.