A recently trans­formed Thames-side locality and transport interchange in south-west Lambeth, formerly the site of London’s most fashionable pleasure gardens 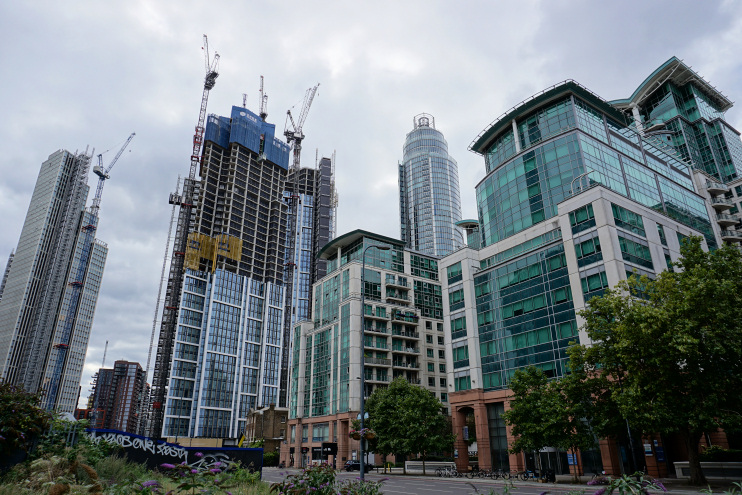 Jane Vaux, possibly a descen­dant of Falkes de Bréauté, owned a house here in 1615 with eleven acres of grounds called the Spring Gardens, which were opened as a pleasure park in 1660. Samuel Pepys recorded later in the decade that he went “by water to Fox-hall, and there walked in Spring Garden.”

The park reopened in 1732 with greatly enhanced attrac­tions – and the construc­tion of West­min­ster Bridge in 1750 improved its acces­si­bility. The gardens provided refresh­ments, concerts, fireworks, displays of pictures and statuary and the like, and at night were lit by over 1,000 lamps. Thomas Rowland­son’s water­colour below (c.1784) shows a crowd of evening concert­goers, probably not long after the gardens reopened. 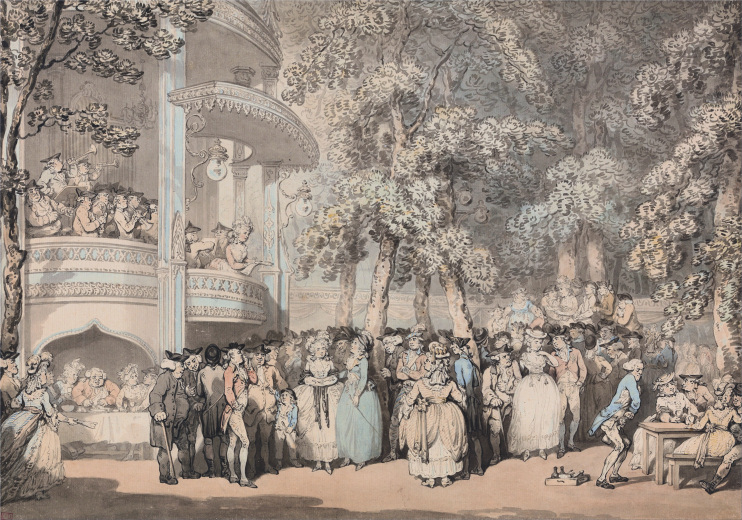 Such was the prestige of Vauxhall Gardens, as they were formally called from 1785, that similar parks were laid out in several cities, including the Tivoli Gardens in Copen­hagen. In Russia, the grand station pavilion (where concerts were performed) at the Pavlovsk pleasure gardens was named Vokzal (Вокзал), because of Vauxhall’s synony­mous asso­ci­a­tion with musical enter­tain­ments. Pavlovsk was the desti­na­tion of the first Russian railway line, which arrived there from St Peters­burg in 1837, and the word vokzal came to mean ‘station’ in Russian and Russian-influ­enced languages such as Uzbek.

Vauxhall Gardens closed in 1859 after two decades of financial diffi­cul­ties but a small remnant, Spring Gardens, survives opposite the northern end of South Lambeth Road. A little to the south, Vauxhall Park opened in 1890. Just across Tyers Street from Spring Gardens, Vauxhall City Farm has been “keeping the lamb in Lambeth” since 1976.

Industry and commerce flour­ished along Vauxhall’s riverside for more than three centuries, and until very recently continued to do so at Nine Elms.

The Vauxhall Ironworks Company built its first car in 1903, badged with Falkes de Bréauté’s heraldic griffin; a plaque at Sainsbury’s petrol station on Wandsworth Road marks the site of the factory. The company relocated to Luton in 1905 and became Vauxhall Motors two years later.

The present Vauxhall Bridge opened in May 1906, replacing the 19th-century Regent Bridge.

Much of Vauxhall was rebuilt with blocks of low-rise flats in the 1930s and parts had become very run-down by the early 1990s, since when the area has been trans­formed in a variety of ways. The Secret Intel­li­gence Service (MI6) moved to a purpose-built head­quar­ters at Vauxhall Cross in 1993 and other parts of the riverside have filled with luxury apartment blocks, notably at St George Wharf – visible just right of centre in the photo at the top, which was taken at the end of August 2021 – and more recently the Corniche, near the northern edge of the map below. Inland, surviving Georgian and Victorian terraced houses have been gentri­fied, while huge sums have been spent on the regen­er­a­tion of council housing.

Vauxhall’s Lusophone community has opened cafés and restau­rants, while a ‘village’ of gay bars and night­clubs has also evolved.

Transport for London completed London’s most distinc­tive bus station at Vauxhall Cross in 2004, with ‘ski-ramp’ solar panels that power most of the station’s lighting. Sadly, there has since been a proposal to knock it down and replace it with a smaller bus station and a pair of extremely tall towers with an 11-storey connecting podium, shown in the centre of the CGI below. Lambeth council’s planning committee approved the Vauxhall Cross Island scheme, by Zaha Hadid Archi­tects, in December 2018. However, at the time of writing (February 2022) it’s still unclear what will even­tu­ally appear at this site. 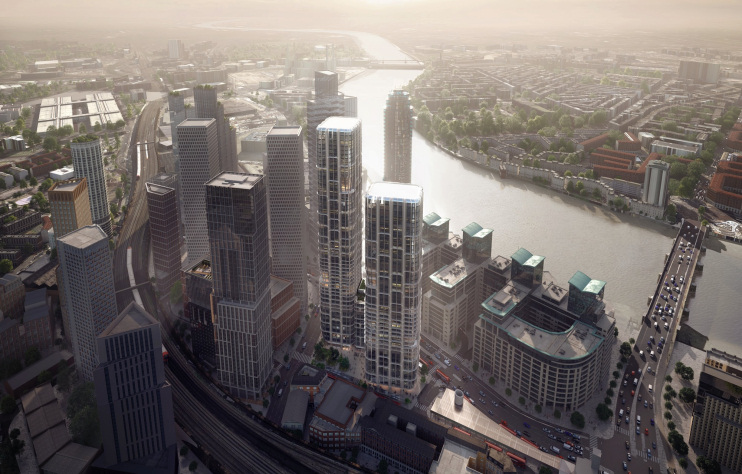 The pleasure gardens crop up frequently in English literature down the centuries – for example, in Vanbrugh’s play The Provok’d Wife (1697), Dickens’s Sketches by Boz (1836–7) and Thackeray’s Vanity Fair (1847–8), although that novel’s Captain Dobbin finds “the Vauxhall amusements not particularly lively.” Thomas Hood’s At Shining Vauxhall is one of several poems inspired by the gardens.

Singer/songwriter Morrissey lived in the area for a while and released the album Vauxhall and I in 1994.