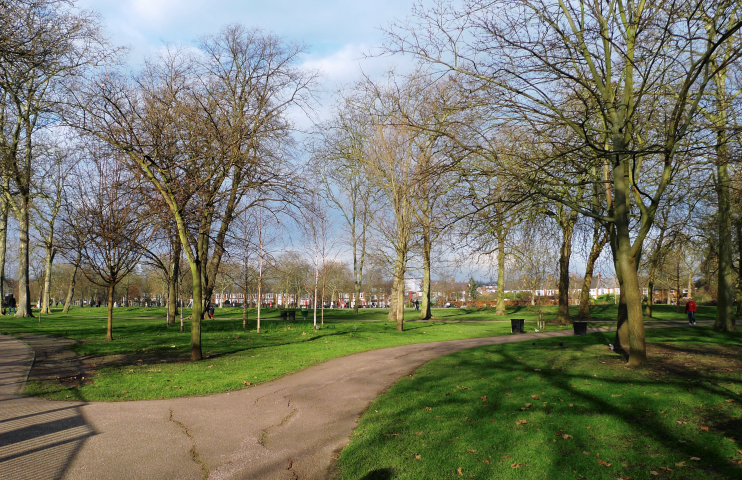 Queen’s Park was created for the Inter­na­tional Exhi­bi­tion of the Royal Agri­cul­tural Society, which was opened by Queen Victoria in 1879. In that same year the London and North Western Railway opened Queen’s Park station on the main line from London to Birmingham.

The 30-acre open space that remains today was a section of the agri­cul­tural show­ground, but much of the rest was built up by the Artizans’, Labourers’ and General Dwellings Company as a grid of terraced cottages for the respectable working classes. The park belonged to the Church Commis­sioners, who gave it to its present owners, the Corpo­ra­tion of London.

During the early 20th century Queen’s Park had a number of small engi­neering firms, but resi­den­tial building – mostly municipal – has now replaced almost all the original industry. The Mozart council estate has been a partic­u­larly unpopular place to live.

In Brent’s Queens Park ward (no apos­trophe) the majority of homes are owner occupied but in Westminster’s Queen’s Park ward (with an apos­trophe) most are rented from the council or a housing association.

At the 2011 census, 36 per cent of Queen’s Park’s residents were white British. There were also signif­i­cant minori­ties of Caribbean, African, Irish, Indian and Bangladeshi birth or descent, and almost 2,000 people with a mixed ethnic background.

Queen’s Park Rangers football club was formed in the year 1882 by the old boys of Droop Street board school. Originally called St Jude’s, the club took its present name after a merger with Christchurch Rangers in 1886.

QPR have played outside the Queen’s Park neighbourhood for the majority of their existence, mostly at their present ground in Loftus Road. They were in and out of top-flight football from the late 1960s to the mid-90s and competed in the Premier League from 2011 to 2013.

The picture of Queen’s Park at the top of this page is minimally modified from an original photograph, copyright Ewan Munro, at Flickr, made available under the Attribution-ShareAlike 2.0 Generic Licence. Any subsequent reuse is freely permitted under the terms of that licence.