A prominent riverside commercial centre, flanked by Putney to its west and Battersea and Clapham to the east 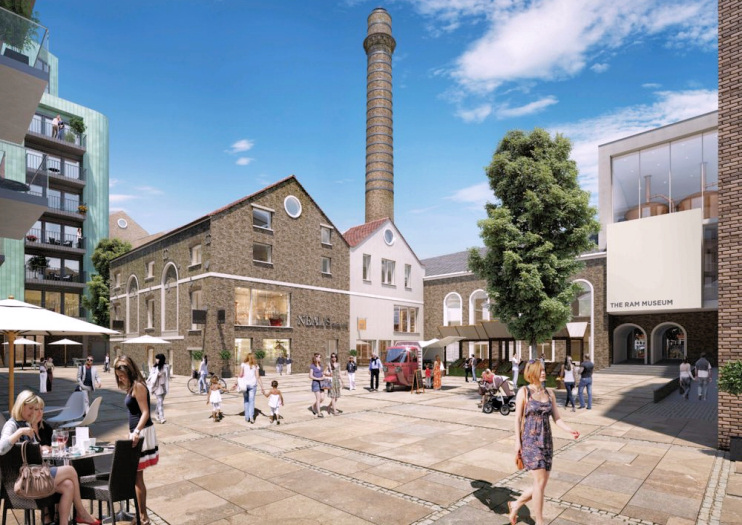 There is evidence that a Saxon named Wendel had estab­lished a fishing settle­ment here by 693. All Saints’ church was in existence by 1234. Farming and market gardening consti­tuted the principal inland occu­pa­tions until the late Middle Ages. By the 16th century the first breweries were operating in Wandsworth and the landlord of the Ram inn was brewing his own beer by 1581.

Like many villages close to London, Wandsworth attracted wealthy City gentlemen seeking a spot to build a country villa. The king’s embroi­derer, William Brodrick, had a house near the present Putney Bridge Road by 1605. At Sword House (now the site of Wandsworth police station) Sir Everard Fawkener played host to Voltaire during his two years’ exile from France in the late 1720s.

Transport improve­ments in the 19th century made Wandsworth a viable place of residence for City workers and during Victoria’s reign the district filled with housing, together with new public buildings and parks.

The Young family took control of the Ram brewery in 1831. It closed in 2006 and, after a considerable delay, is now being redeveloped as part of the Ram Quarter, shown in the CGI above. Historic buildings will be restored and brought into public use as a new micro-brewery and brewing museum, accompanied by shops, restaurants and leisure facilities beside the River Wandle.

Satellite local­i­ties evolved at Earls­field from the 1880s and at South­fields in the early years of the 20th century. Interwar slum clearance brought municipal housing projects. Bomb damage in the early 1940s was the spur to an extensive programme of post-war rede­vel­op­ment, including more council estates, while many residents chose to move south to outer suburbs like Croydon or the new town of Crawley.

Wandsworth gasworks closed in 1971 and devel­op­ment began along the riverside. In the same year the famously dowdy Arndale shopping centre was built on the site of amenities that had included a greyhound stadium and swimming baths. It has since been rebuilt – and then extended – as Southside, with more than 100 retail units, a fitness centre and a 14-screen multiplex cinema. Surrounding tower blocks have been radically remod­elled. Apartment complexes have replaced disused indus­trial premises in the town centre and by the Thames, notably the 400 flats of the Riverside Quarter on the Wandle delta. In addition, the sites of two former DIY stores off Swandon Way are being inten­sively rede­vel­oped, primarily with housing blocks.

Half the characters in the 2003 blockbuster movie Love Actually seem to live in Wandsworth, including Martine McCutcheon’s Natalie, at the ‘dodgy end’ of the district. The film’s climax is set at a nativity play in Wandsworth – actually shot at Putney’s Elliott School.