A grand 18th-century suburb centred on Sloane Street, rebuilt from the 1880s onwards 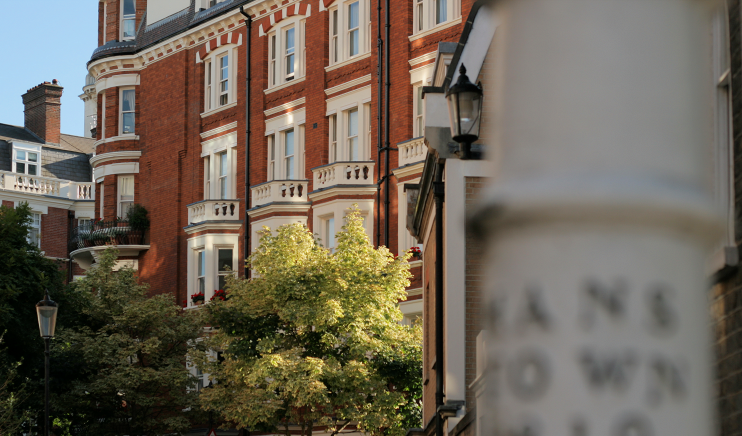 Sir Hans Sloane was perhaps Chelsea’s greatest bene­factor before Roman Abramovich. A president of the Royal Society, Sloane moved to Chelsea in 1742 and subse­quently endowed the Physic Garden down by the Thames. His vast scien­tific and literary collec­tion became the nucleus of the British Museum after his death in 1753.

During the 1770s the outward spread of London led Fulham architect Henry Holland to spot an oppor­tu­nity south of Knights­bridge. He acquired building rights from the Earl of Cadogan, who had come into posses­sion of the land via his marriage to one of Hans Sloane’s daughters. Spacious three-storey terraces were erected along the west side of Sloane Street and in Hans Place, then around Sloane Square, and finally in Cadogan Place in 1790.

Holland built himself a mansion called Sloane Place (or the Pavilion) in the south-western part of his ‘town’ with grounds land­scaped by Capa­bility Brown.

Cadogan Square replaced Sloane Place when R Norman Shaw and other archi­tects were commis­sioned to rein­vig­o­rate Hans Town just a century later, after criticism of the district’s anonymous archi­tec­tural standards. Each new house was given its own distinc­tive detailing, further enhancing the prestige of the locality. The Cadogan hotel opened at 75 Sloane Street in 1887.

Pevsner’s London North-West devotes several pages to the archi­tec­ture of the rebuilt Hans Town, pointing out that: “In few other places in London can the pros­perous 1880s be studied more profitably.”

Sloane Square was also progres­sively renewed, and the Royal Court Theatre opened on its east side in 1888. It later became England’s foremost home for new playwrights.

Several high-class mansion blocks followed – often in Hans Town’s newly prevailing Queen Anne style – such as 9 Wilbraham Place, which was built c.1896 and is visible in the photo­graph at the top of the page.

Where parts of Hans Town were rebuilt in the 20th century the results were generally less striking, with the honourable excep­tions of the very Scan­di­na­vian-looking Danish embassy at 55 Sloane Street and Peter Jones on Sloane Square.

The Christian Scien­tists built a capacious and lavishly furnished church on Sloane Terrace in 1905–7. The build­ing’s architect was Robert Chisholm, whose very original style drew on Byzantine, Romanesque, Indian and Islamic influ­ences. The church closed in 1996. It was subse­quently acquired by the Cadogan estate and reopened in 2004 as Cadogan Hall, which stages classical, jazz, folk and world music events, hosts debates and confer­ences, and serves as the London home of the Royal Phil­har­monic Orchestra.

Postal district: SW1
Population: 8,792 (2011 census, Hans Town ward, which has since been merged with Brompton)