A much-redeveloped town centre surrounded by late Victorian and Edwardian housing, situated on the River Ravensbourne south of Lewisham

Perhaps surpris­ingly, the district’s name is not some arcane corrup­tion, but probably does mean that wild cats used to frequent the ford that is now the site of Catford Bridge, although an alter­na­tive expla­na­tion is that ‘the cat’ was a local landowner’s nickname. The name was first recorded in 1254, around the time that the Abbey of Ghent, which had owned the land here­abouts since at least the early tenth century, sold it off as a sub-manor. Two moated houses are recorded as having been built there­after, one near Catford Bridge and the other at Rushey Green. Each of these houses had become the nucleus of a small hamlet by the mid-18th century.

The green was enclosed in 1810, and soon built upon. The opening of Catford Bridge station on the Mid Kent Railway in 1857 encour­aged the construc­tion of houses for the more affluent middle classes. In 1875 the Lewisham board of works built offices here, which later became the town hall, and in the 1880s parades of shops lined Catford Broadway and the parish church of St Laurence was consecrated.

With the opening of Catford station in 1892 and the arrival of tram services, suburban devel­op­ment began in earnest. Landowners sold their farms and major devel­opers built extensive estates for clerical commuters, with some light industry to the south. Between the wars, numerous places of enter­tain­ment were built, including a theatre, concert hall and greyhound stadium, together with new shops on the Broadway.

Lewisham town hall was knocked down and rebuilt in 1958 and the council radically rede­vel­oped the town centre from the early 1960s, with blocks of flats and a shopping centre. The brutalist office tower Eros House replaced the Lewisham Hippo­drome and the Gaumont cinema. St Laurence’s church was demol­ished and replaced by the council’s Laurence House, and a new church was built on Bromley Road. The council’s area action plan has sought to improve the town centre and build its role as an “attrac­tive, safe and animated” shopping, cultural and leisure desti­na­tion – though some locals suspect that the idea of Catford ever regaining its status as a ‘desti­na­tion’ is an over-ambitious statement of intent. 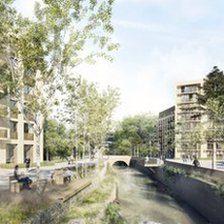 Catford greyhound stadium closed without warning in 2003 and the 12-acre site remained derelict until 2012, when it was trans­ferred to the Greater London Authority under the Localism Act. Chosen as the preferred bidder, Barratt Homes is now building 589 prop­er­ties here, of which 113 will be for ‘afford­able rent’ and 60 will be earmarked for shared ownership. The £117m project is due for comple­tion in 2017.

Mayor of London Boris Johnson was quoted as saying: “The trans­for­ma­tion of Catford Dogs, which for the last decade has been left empty and unused, will not only bring hundreds of new homes to the heart of London, but will feed into the wider regen­er­a­tion of Catford town centre.”

Spike Milligan’s poem ‘Catford 1933’ describes the grim nature of life in this locality, where his family came to live following his father’s discharge from the army in India.

In March 1966 the ‘Battle of Mr Smith’s Club’ in Rushey Green brought about the downfall of south London’s most powerful criminal gang, the Richardsons, and led to the revenge killing of George Cornell by the Kray twins.