An industrial and residential area in east Greenford, bounded by the River Brent and the Paddington branch of the Grand Union Canal 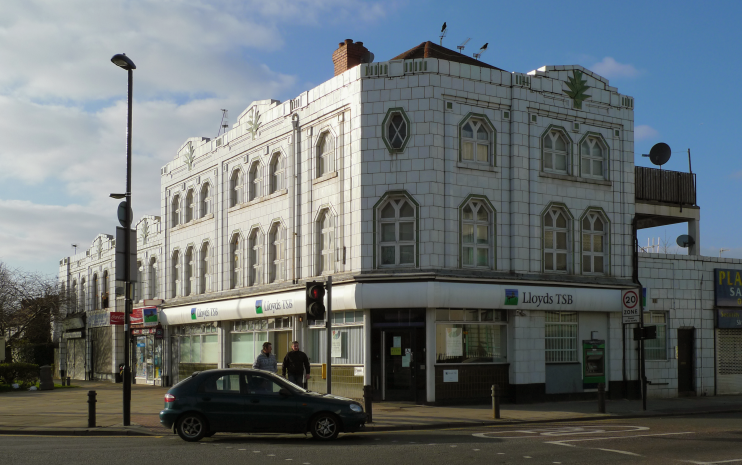 Perivale was orig­i­nally Greenford Parva, or Little Greenford, and the name may be a corrup­tion of Parva. Alter­na­tively it may derive from ‘pure vale’ or ‘pear vale’. Stories have been told of a sequence of myste­rious deaths at the medieval Perivale Mill but there is little docu­men­tary evidence even for the mill’s existence.

Perivale’s grade I listed church of St Mary the Virgin is one of the quaintest and oldest churches in Middlesex, with its various parts dating from most centuries since the twelfth. The church closed for regular worship in 1972 and is now cared for by a group of volun­teers who organise chamber and instru­mental concerts here.

The manor of Perivale evolved in the late Middle Ages, with links to the Mercers’ Company of the City of London.

The manor house was demol­ished by 1850 and Perivale remained very quiet into the early years of the 20th century. The station opened in 1904 but the village still had fewer than 100 inhab­i­tants by the time of next census.

After 1930 the avail­ability of open land and the coming of the Western Avenue brought manu­fac­turers that included Sanderson’s (wallpaper) and Hoover (vacuum cleaners). Resi­den­tial estates followed, notably Perivale Park, built to the west of the station by Cliffords Estates, who boasted of its 20 different styles of elevation.

Devel­op­ments to the north of the indus­trial area included local shops on Bilton Road. By 1951 Perivale’s popu­la­tion had risen to almost 10,000.

Nowadays, 46 per cent of Perivale’s residents are white, and a quarter of those are Polish (Greenford is London’s Little Warsaw). Fifteen per cent of all residents are of Indian birth or descent. In most respects, Perivale’s socio-economic profile is repre­sen­ta­tive of the borough as a whole, but a little more affluent.

Perivale Wood is ancient woodland formerly known as Braddish Wood, and privately owned by the Selborne Society. This is the second oldest nature reserve in the country but is only open to the public on occasional days.

The picture of Lloyd’s Bank on this page is adapted from an original photograph, copyright Ewan Munro, at Flickr, made available under the Attribution-ShareAlike 2.0 Generic Licence. Any subsequent reuse is hereby freely permitted under the terms of that licence.