A swathe of steeply rising open space and woodland (and a pair of golf courses), separating Perivale and Greenford from Sudbury 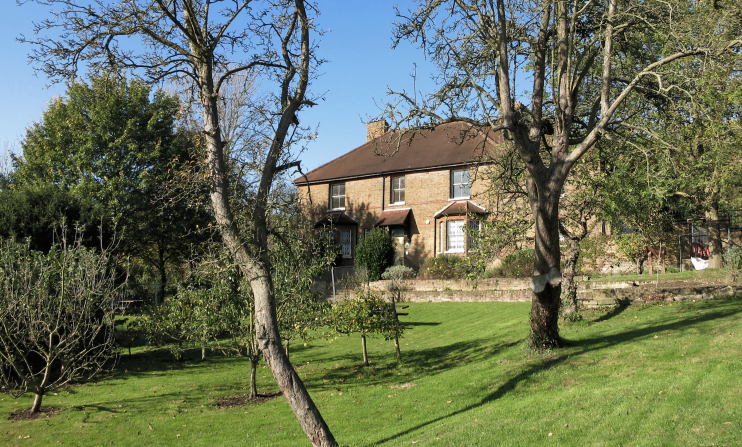 The ancient plough soil on the brow of the hill suggests Neolithic farming, which may have begun 7,000 years ago. Numerous Iron Age potsherds have been unearthed here and the site has accord­ingly been scheduled under the Ancient Monuments and Archae­o­log­ical Areas Act – though there is no monument on the hilltop except for the modern trian­gu­la­tion pillar.

Horsendun (as it was then spelt) was first recorded in 1203 and derives from an Old English personal name (Horsa) and dūn, which could either have meant ‘hill fort’ or simply ‘hill’ – and it is not known which applied in this case.

The Victoria County History says: “Nothing is known of the partially moated site on the lower slope of Horsenden Hill … The site may be iden­ti­fi­able with a capital messuage which was ruinous in 1342.” It is presumed to have been the site of one of Perivale’s two former manor houses.

Horsenden Wood, which belonged to the lord of the manor of Greenford, lay on the northern slope of the hill. Over a period of several centuries many of its trees were cut down for timber and firewood, and the roots and stumps were later grubbed up so that crops could be grown.

The Paddington arm of the Grand Union Canal wound its way around the southern slopes of the hill in the latter years of the 18th century and was formally opened in July 1801.

Shown in the photo­graph at the top of the page,* Horsenden farmhouse dates perhaps from the 1860s.

The hamlet of Brabsden Green lay due west of the summit of the hill beside Horsenden Lane. In the 19th century it consisted of a few cottages, a village shop and a public house, the Ballot Box, which was so called because of its use as a polling station for canal boatmen.

Most of the farmland on the east side of Horsenden Hill was bought in 1920 by the newly formed Sudbury golf club. The rest was was acquired by Ealing council in 1938 as part of its green-belt scheme and the open space was extended by the acqui­si­tion of neigh­bouring charity-owned land in 1942. During the Second World War the western fields were used for growing wheat and vegeta­bles and remained in culti­va­tion until about 1950.

The Ballot Box pub was re-sited in Greenford after the Second World War and the rest of the houses of Brabsden Green were demol­ished in 1970s.

Near the canal at the foot of Horsenden Hill, as Diamond Geezer reported in 2011, “Ealing council have kindly thought fit to build a visitor centre. I was expecting a café and a rack of souvenir pencil sharp­eners, but instead found a few locked buildings and a painted shed.”

The neigh­bouring farm buildings are used by Enfield’s Capel Manor College, mainly as a base for arbori­cul­tural fieldwork. (Click here for a Bing bird’s eye view of the farm.)

Horsenden Hill is the largest conser­va­tion area in the borough of Ealing, and is divided by Horsenden Lane North and the canal into three sections:

* The pictures of Horsenden Farm House and the Capital Ring path on this page are both adapted from original photographs, copyright Des Blenkinsopp, at Geograph Britain and Ireland, made available under the Attribution-ShareAlike 2.0 Generic Licence. Any subsequent reuse is hereby freely permitted under the terms of that licence.