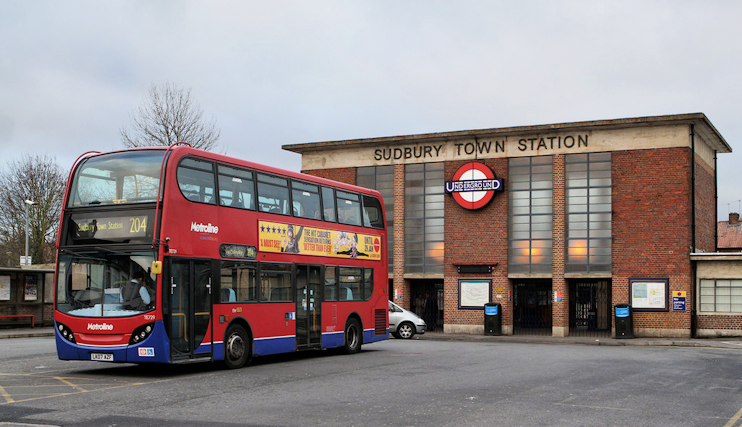 Sudbury’s name was first recorded in the late 13th century as Suthbery – the southern manor house. Its northern coun­ter­part may have been the manor house of Harrow.

Sudbury Court was the principal Middlesex residence of the arch­bishops of Canter­bury until the end of the 14th century, after which Sudbury manor was divided and leased out. Sudbury Common at this time stretched from Wembley to the foot of Harrow Hill.

From 1630 the manor was in the hands of the family that became the Churchill-Rushouts, who much later developed Northwick Park. Squatters erected cottages on the common in the 17th century. Gradual improve­ments to the Harrow Road brought the first houses and inns, including the Swan, the Black Horse and the Mitre, and the village consisted of 70 prop­er­ties in 1759. Several substan­tial houses were built following the enclosure of the common in 1817.

This was the first part of the Wembley area to undergo suburban devel­op­ment and when present-day Wembley Central station opened in 1842 it was initially called Sudbury. Shops were estab­lished around the Swan and schools opened in 1846 and 1880. Sir George Barham, the founder of the Express Country Milk Supply Company (later Express Dairies, now a subsidiary of Dairy Crest) , came to live in Sudbury in 1895 and the grounds of his mansion now form Barham Park.

By the end of the 19th century the popu­la­tion had reached almost 1,000. In the first decade of the 20th century Sudbury gained two electric train services as well as electric trams. Day-trippers visited the Swan’s tea garden and a race­course operated for a while, on the site of the present Methodist church.

Many of the Victorian villas were quickly demol­ished and their grounds were developed with housing. Outlying farms suffered the same fate after the First World War, and devel­op­ment was further stim­u­lated in the mid-1920s when the British Empire Exhi­bi­tion was staged at Wembley Park.

By the outbreak of the Second World War the suburb had four churches, an Odeon cinema (later the Starlite ballroom) and Charles Holden-designed stations at Sudbury Hill and Sudbury Town (the latter shown in the photo­graph at the top*). Wembley council built the Sudbury Farm estate after the war and the Churchill-Rushouts laid out the Sudbury Court estate.

Most of the surviving old buildings of Sudbury were demol­ished during the 1950s, including Barham House. From the 1960s to the present day, new construc­tion has mainly taken the form of privately-built blocks of low-rise flats.

Wasps rugby football club played in Sudbury from 1923 until 1996, at a ground now covered by housing. Compton Avenue is named after the club’s former captain and president, Neville Compton.

Marked with a pink pin the centre-top of the map below, Sudbury Cottages consti­tute the smallest of Brent’s conser­va­tion areas, preserving all that remains of the historic core of the early settle­ment that grew up at Sudbury Court.

Like neigh­bouring Wembley, Sudbury is very popular with families of Indian descent. Residents of South Asian heritage accounted for more than half the ward’s popu­la­tion at the 2011 census – primarily Indian, but with signif­i­cant Sri Lankan, Pakistani and Nepalese minori­ties too.

The ‘Sudbury box’ was a simple, elegantly efficient architectural style introduced to surface-level station buildings on the Piccadilly line by Charles Holden. Opened in 1931, Sudbury Town was the first station to employ the technique, which Holden over-modestly characterised as just “a brick box with a concrete lid.” Other architects commissioned by London Transport soon began to copy the format. Usage of the term ‘Sudbury box’ is sometimes limited to rectangular structures but can encompass other shapes, such as those at Arnos Grove (circular) and Bounds Green (octagonal).

* The picture of Sudbury Town station at the top of this page is adapted from an original photograph, copyright Martin Addison, at Geograph Britain and Ireland, made available under the Attribution-ShareAlike 2.0 Generic Licence. Any subsequent reuse is freely permitted under the terms of that licence.