‘This king, queen and all princes of a metro station’

Arnos Grove tube station is widely regarded as one of the finest works by the architect Charles Holden, under the direction of Frank Pick, who has been called ‘the man who built London Transport’.

A Manchester-educated draper’s son who twice declined offers of a knight­hood, Charles Holden began his career at the close of Victoria’s long reign and built his repu­ta­tion on combining prin­ci­ples of classical purity with modern methods and materials.

His earnest belief was that 20th-century archi­tec­ture should “… throw off its mantle of deceits; its cornices, pilasters, mouldings …” and he embraced the philoso­phies of the modernist and art deco movements. At the time he created Arnos Grove, Holden had recently completed what was to become London Underground’s head­quar­ters at 55 Broadway and had been appointed to design Senate House as the admin­is­tra­tive centre of the Univer­sity of London.

Lincolnshire-born Frank Pick became managing director of the Under­ground Group in 1928 but he had earlier been its publicity officer – and art and design remained his first love. He occa­sion­ally gave public lectures on the subject, in which he demon­strated the remark­able scope of his knowledge. One creator of posters for the under­ground recalled him suggesting that she seek inspi­ra­tion from a specific painting in a German art museum, and giving her precise direc­tions on how to navigate her way through the gallery to view the original work in situ.

Prior to the extension of the Piccadilly line, Pick and Holden toured Europe together to observe the latest inno­va­tions in the design of public buildings. They were partic­u­larly impressed by what they saw in Scan­di­navia and the Netherlands.

Arnos Grove station opened in 1932 at what was then the north­ern­most end of the Piccadilly line. To the untutored eye, the building may at first look nothing special. Indeed, the architect himself char­ac­terised his free-standing stations as simply “brick boxes with concrete lids.” Its modest glory lies in its elegant simplicity, in the harmo­nious fusion of form and function. There are splendid details too, inside the booking hall and on the platforms, which were designed by Stanley Heaps, the Under­ground Group’s in-house architect.

Frank Pick would regularly visit his new stations to ensure that they were being appro­pri­ately main­tained and that no tasteless adornment had been permitted to spoil the clean lines of the archi­tec­ture. If a misguided station manager had installed a vending machine or put up a sign in an inap­pro­priate place, Pick would force­fully demand its immediate removal.

Pick’s purism has long been a thing of the past. Like most stations, Arnos Grove is now adul­ter­ated inside and out by every conceiv­able accessory, and fenced in by bollards, railings, bus stop signs and other street furniture. Photographs of the station taken soon after its comple­tion show an unblem­ished exercise in perfect symmetry – a very different prospect from that which exists today.

The station’s biggest fan is the archi­tec­tural critic Jonathan Glancey, who has praised it at length in books and newspaper articles and is the author of the quote at the top of this article. He has even selected it as one of the twelve ‘great modern buildings of the world’, where it sits a little uneasily alongside the Empire State Building, Bilbao’s Guggen­heim Museum and the Sydney Opera House. ‘The station is truly what German art histo­rians would describe as a gesamtkunst­werk, a total and entire work of art’, wrote Glancey in The Guardian in October 2007.

In 2011 Arnos Grove station was uprated from a grade II listing to grade II*, the category reserved for “partic­u­larly important buildings of more than special interest.” 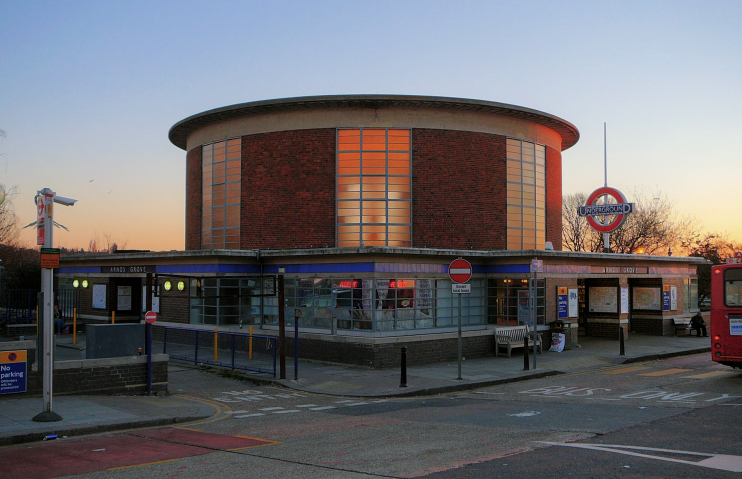