A station, road and park located in north-central Stepney 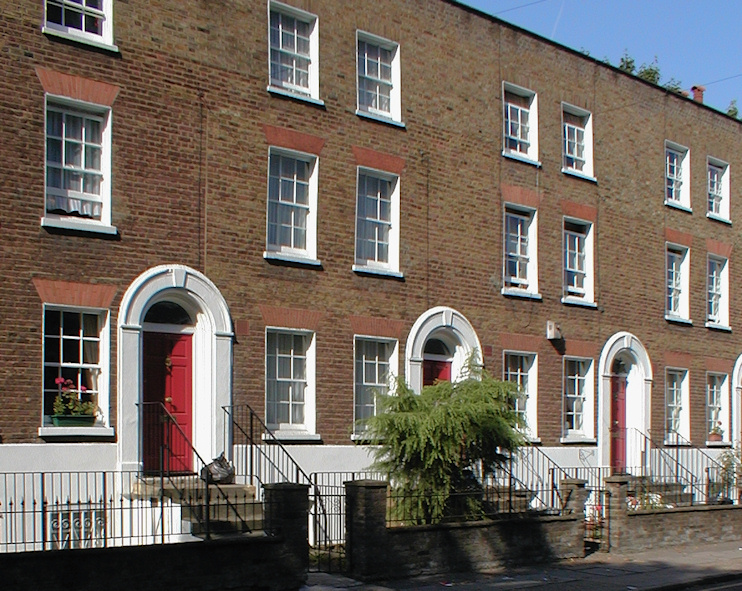 Although Stepney is one of east London’s most ancient settle­ments, Stepney Green is a 19th-century invention. Both the road and its neigh­bouring common land were formerly called Mile End Green. There are earlier mentions of a green at Stepney but these do not neces­sarily identify the present locality.

The green was flanked by fine houses in the 17th and 18th centuries and some of these survive today. For half its length, the road is divided in two by Stepney Green Gardens, created in 1872 from a remaining strip of the old Mile End Green.

From the late 19th century, when this had become a strongly Jewish area, self-help dwellings companies built tenement blocks, of which the most distinc­tive is Stepney Green Court. Stepney Green station opened on Mile End Road in June 1902.

In 1905 the ring­leader of the mutiny aboard the Russian battle­ship Potemkin, torpedo quar­ter­master Afanasy Matushenko, sought refuge at an anarchist and socialist meeting place in Dunstan House on Stepney Green. Matushenko soon returned to Russia, where he was caught and hanged in 1907.

Like the rest of Stepney, the vicinity of the green was heavily rede­vel­oped with municipal housing from the 1930s to the 1970s. Stepney Green Park was formed at the end of this period in order to provide some much-needed open space, but sadly at the expense of good early-19th-century houses.

The St Dunstan’s and Stepney Green ward is estimated to have London’s highest propor­tion of people in social grade E. At Stepney Green secondary school four-fifths of pupils are eligible for free school meals and 98 per cent are from the Sylheti-speaking Bangladeshi community.

Bernard Kops, an East Ender of Dutch-Jewish parentage, achieved recognition in 1959 with his first play, The Hamlet of Stepney Green, an optimistic reworking of Shakespeare’s Hamlet.