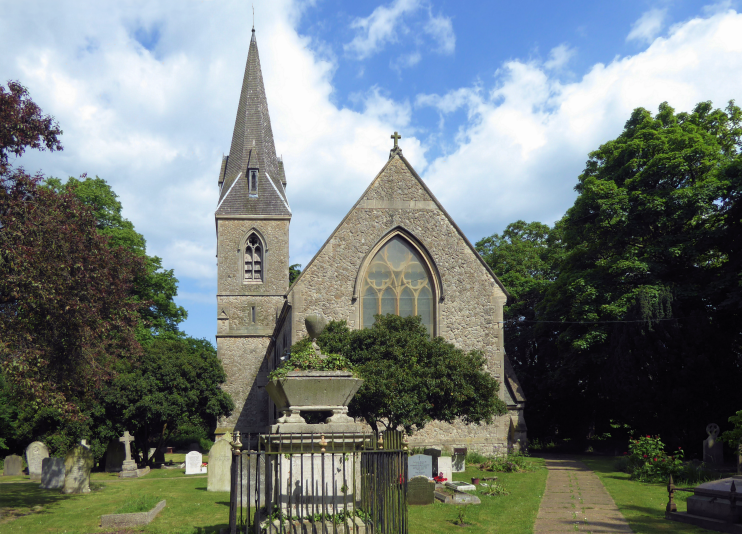 When it was first recorded in Domesday Book, Cranham manor may already have been in existence for several centuries. The early spelling ‘Crawenho’ indicates that this was ‘a spur of land frequented by crows’. The parish was orig­i­nally known as Bishop’s Ockendon (or its Latin equiv­a­lent) but later took the name of its largest constituent manor.

Cranham Hall was first mentioned in 1344, shortly before it was purchased by Sir Ralph St Leger, of Kent. Several changes of hands later, Sir William (later Lord) Petre bought the manor and rebuilt Cranham Hall around 1600. The hall was rebuilt again two centuries later and this version survives today as a retire­ment home.

Cranham remained a very quiet agri­cul­tural village throughout the 19th century. Apart from the hall, the first brick structure seems to have been a workhouse in 1828, since replaced by a pub.

Shown in the photo at the top,* All Saints’ church was rebuilt in 1873 using some materials from its medieval predecessor.

After the opening of a nearby brick­works in 1900, Cranham began to grow, but only slowly. A widely adver­tised 1925 plan to lay out a garden suburb north of the railway line did not come to fruition. The council built a few houses in 1931 but rapid expansion did not occur until the sale of the Cranham manor estates in 1937.

Most of the council’s terraced houses and pebble-dashed semi-detached houses were erected in the 1950s, when Cranham’s popu­la­tion trebled. The main shopping precinct is on Front (formerly Cranham) Lane, behind which is the District Line railway depot.

South of the new centre is bungalow country, and beyond this lies the old village with a handful of Victorian cottages and the hall. A few executive-style homes have been added more recently.

There are two nature reserves on the east side of the village: Cranham Marsh and Cranham Brick­fields.

The previous incarnation of Cranham Hall was the home of General James Oglethorpe, founder of the American colony of Georgia. He died at the hall in 1785 at the age of 89. Oglethorpe has given his name to the local primary school – and to a university in Atlanta. Streets laid out for council housing in Cranham have names with Georgian connections.

* The picture of All Saints church at the top of this page is adapted from an original photograph, copyright Marathon, and the picture of the Cranham village sign is cropped from an original photograph, copyright Terry Joyce, both at Geograph Britain and Ireland, made available under the Attribution-ShareAlike 2.0 Generic Licence. Any subsequent reuse is hereby freely permitted under the terms of that licence.