A compact and pleasant residential locality – squeezed almost out of existence by Fulham, Chelsea and Earls Court, between which it lies – dominated by a big, beautiful cemetery 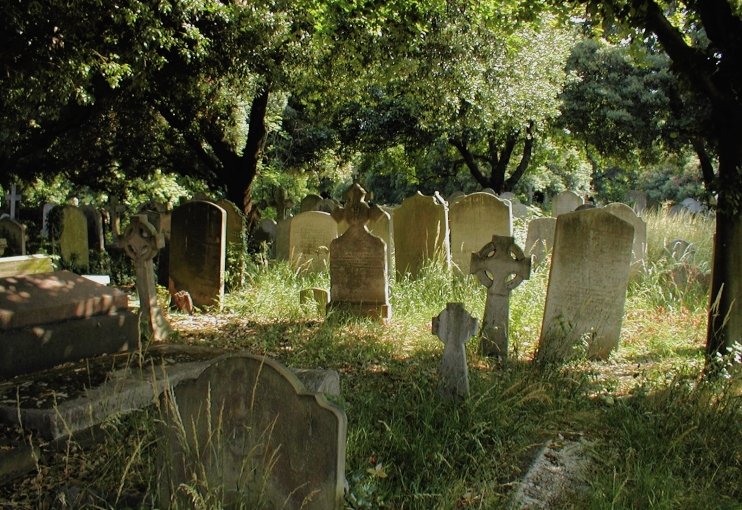 West Brompton was an area of fields and market gardens until the late 18th century. Much of the land was acquired from 1801 onwards by the Gunter family, confec­tioners of Berkeley Square.

Over the course of the 19th century the Gunters and their lessees built thousands of houses on newly created streets, named after a variety of family asso­ci­a­tions. Edith Grove, for example, honours Captain Robert Gunter’s daughter, who died of scarlet fever at the age of eight. Finbor­ough Road is named after the country seat of the Pettiward family, another local landowner.

Brompton cemetery (shown in the photo­graph above) was founded in 1837 as the West of London and West­min­ster cemetery, on a site that had previ­ously been fields and nurseries, mainly owned by Lord Kens­ington. An addi­tional 4½ acres was obtained in 1844 from the Equitable Gas Company, giving access to Fulham Road.

The cemetery has a formal layout with a central chapel, based on the design of St Peter’s Basilica in Rome (in miniature, of course). It was compul­so­rily purchased from the private owners in 1852 by the General Board of Health, becoming the first and only London cemetery under govern­ment control.

Around 200,000 people have been buried here, including eleven holders of the Victoria Cross, 3,000 Chelsea Pensioners, suffragette leader Emmeline Pankhurst, and singer and operetta composer Richard Tauber. In 1997 the Sioux Indian Chief Long Wolf was reburied in South Dakota, having been interred at Brompton in 1892.

According to the 2011 census, West Bromp­ton’s Redcliffe ward has London’s greatest concen­tra­tion of residents from Italy and elsewhere in conti­nental western Europe.

The Finbor­ough public house has a highly regarded upstairs theatre, opened in 1980.

The author Beatrix Potter often walked in Brompton Cemetery and seems to have found the names for many of her characters on the gravestones here.

Dylan Thomas’s first London home was 5 Redcliffe Street, where he was surrounded by “poems, butter, eggs and mashed potato.”