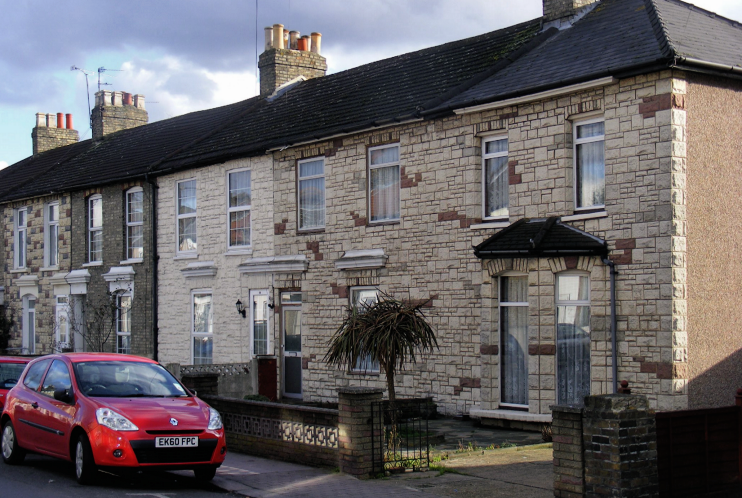 Edmonton was first recorded in Domesday Book, as ‘Adel­me­tone’, which had been a farmstead belonging to a man named Ēadhelm. At this time it was the smallest of the hundreds (admin­is­tra­tive areas) of Middlesex, but never­the­less encom­passed Enfield, Tottenham and South Mimms. Woodland covered much of the district and pig-keeping was the main form of agriculture.

Market gardens were estab­lished after defor­esta­tion, while the road to Ware and Hertford – which became known as Fore Street for most of its length here – became the focus of ribbon development.

Twin nuclei formed at Edmonton Green, at the junction with Church Street in Lower Edmonton, and around the cross­roads with Silver Street and Watery Lane (now Angel Road), which was the site of the Angel public house.

Edmonton was the 17th-century home of Elizabeth Sawyer, who was accused of having witched her neighbour’s children to death and was hanged after the devil’s mark was found above the base of her spine. The events inspired two plays.

Away from Fore Street, Edmonton became a desirable resi­den­tial neigh­bour­hood in the late 18th century but this did not last. By 1800 the gentry were moving out to Southgate and the place was inhabited by ‘retired embroi­dered weavers, their crummy wives and tightly laced daughters’, according to the scur­rilous contem­po­rary writer, John Thomas Smith.

It fell further as exploita­tive builders covered the central area with cheap housing in the latter decades of the 19th century. Nearer the River Lea, improve­ments in drainage permitted the estab­lish­ment of industry on former marshland.

The Great Cambridge Road brought more housing to the west of the district when it became the principal north–south route in 1924. That year also saw the start of municipal house­building in Edmonton, on the Hyde estate, south of Church Street. An RAF plane crashed onto the estate in 1938 and more than a dozen people died.

The council built a number of tower blocks in the 1960s and 1970s and many of these prop­er­ties have recently been refur­bished or replaced.

The area beside the River Lea continues to provide some of the prime oppor­tu­ni­ties for initia­tives of various kinds, although parts have green-belt protec­tion and others may be ring-fenced for indus­trial use despite the council’s desire for more housing.

Ware­houses, business centres and super­stores have filled disused indus­trial sites and some new housing has been built in the locality formerly known as Marsh Side. The regen­er­a­tion of Edmonton Green has been the largest project under­taken in the district in the past quarter century – but a much bigger one is now under devel­op­ment at Meridian Water.

At the 2011 census Edmonton had almost 9,000 residents of Turkish or Turkish Cypriot heritage, accounting for more than 10 per cent of the district’s total popu­la­tion. Edmonton also has signif­i­cant numbers of residents of black African and black Caribbean descent but rela­tively few Asians.

The play The Merry Devil of Edmonton was published in 1608 and performed at the Globe. Supposedly based on a true story, it tells of a prankster who on one occasion fools the Devil himself.

Edmonton gave its name to the Hudson’s Bay Company’s Edmonton House in Alberta, Canada in 1785 and thence to the settlement that grew up around it, which is now far larger than its progenitor.

The poet John Keats lived on Church Street from 1805 to 1815, first in his grandmother’s house and then in the attic above the cottage surgery at 7 Church Street, where he served an apprenticeship as a surgeon-apothecary.

* The picture entitled N9 stone cladding at the top of this page is slightly modified and cropped from an original photograph, copyright Sludge G, at Flickr, made available under the Attribution-ShareAlike 2.0 Generic Licence. Any subsequent reuse is hereby freely permitted under the terms of that licence.