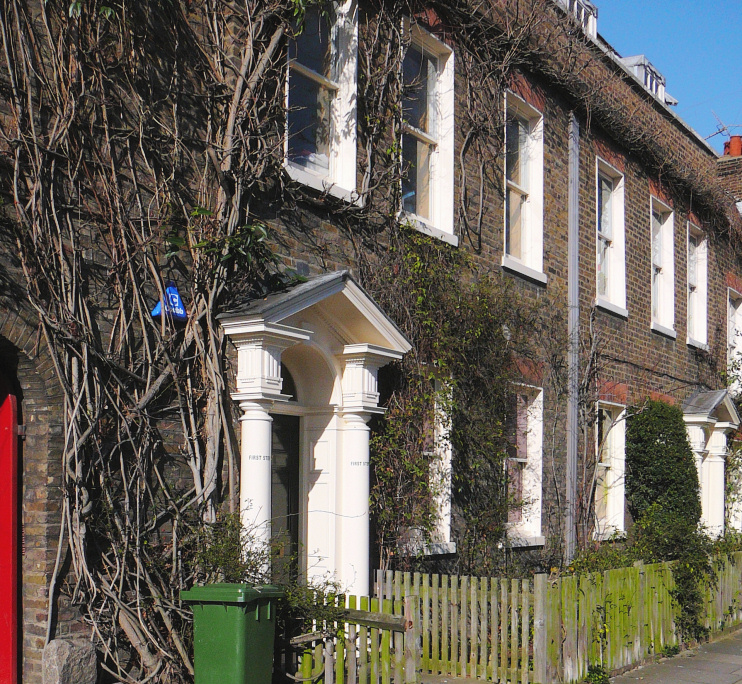 Like the better-known Angel in Islington, Angel Corner, Upper Edmonton, takes its name from an inn – in this case one that stood here from at least the 17th century. Another popular inn, the Bell, lay to the south on Fore Street.

There was much demol­ishing and rebuilding of these taverns over the centuries, and some inter­changing of names, and no trace of the originals remains. They were a focus of Edmonton social life, hosting every­thing from riotous fairs to petty sessions and manorial courts.

A sorry-looking borough plaque at the site of the Angel announces that the Stamford Hill and Green Lanes Turnpike Trust met here from 1713 until 1826.

Fore Street was built up as early as the mid-18th century and four pairs of adjoining brown-brick houses survive north-west of the cross­roads, at Angel Place – shown in the photo­graph above.

South of the junction the area filled with cheap tenements from the early 19th century, almost all of which have now been cleared away and replaced.

From the 1860s the Angel became a desti­na­tion for horse-drawn omnibus services and in the early 20th century for some of London’s first motor buses. Shopping parades lined each side of Fore Street south of the Angel.

The North Circular Road was diverted beneath Fore Street via an underpass from 1997, greatly easing the junction’s traffic conges­tion. This presented an oppor­tu­nity to make other envi­ron­mental improve­ments but little was done – except for the later removal of the local­i­ty’s sole distinc­tive feature: an arched welcome/goodbye sign across Fore Street.

Although it’s just a couple of hundred yards from the lovely Pymmes Park, the Angel remains one of London’s most down-at-heel places to shop, dominated by a fero­ciously ugly branch of Lidl.

William Cowper’s comic poem ‘The Diverting History of John Gilpin’ tells the story of a Londoner whose runaway horse carried him ten miles past the Bell, where he was supposed to be having his wedding anniversary dinner.