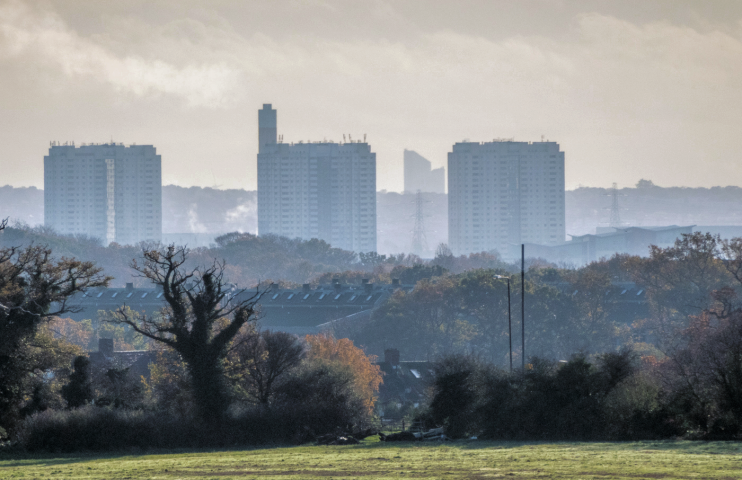 Houses appeared around Edmonton Green from the late 17th century and wholly encircled it in the following century. Fairs were held on the green and menageries were exhibited here.

A station opened in 1849 and the surrounding area was built up in the 1880s and 1890s. By the 1930s Edmonton Green had become a major shopping desti­na­tion, drawing visitors from a wide catchment area.

In the mid-1960s the newly formed Enfield council took over a project planned by its Edmonton prede­cessor, sweeping away ‘substan­dard’ Victorian housing and building a shopping centre, municipal housing and various amenities. The plan orig­i­nally included a new civic centre but this element was subse­quently abandoned. Shown in the long-distance photo­graph above,* the three 25-storey blocks of the Edmonton Green estate – Grampian House, Mendip House and Pennine House – were completed in 1972.

Edmonton Green was the largest munic­i­pally owned shopping centre in London but by the end of the 20th century found itself losing out to compe­ti­tion at Wood Green, Waltham­stow and further afield, while Enfield Town and Southgate became more appealing to commer­cial investors within the borough. The close proximity of high-rise flats to multi-storey car parks proved an encour­age­ment to crime. 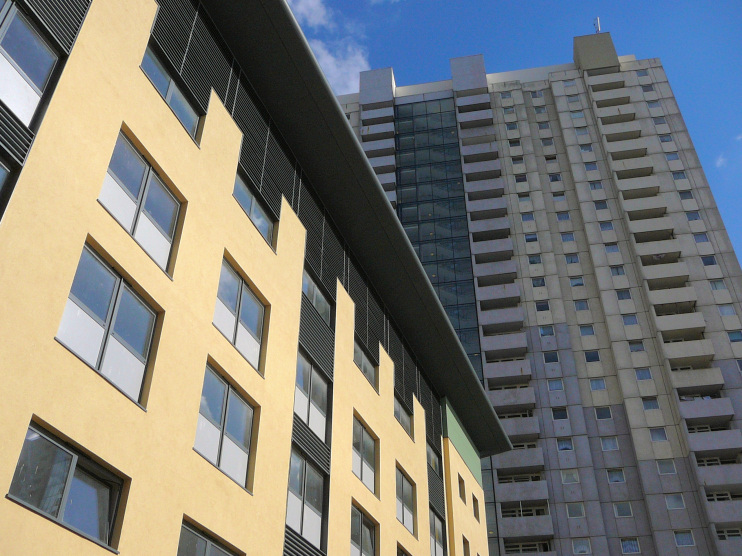 Over the first decade of the 21st century, in one of the largest mixed-use schemes of its kind, Enfield council worked with a property developer and a housing asso­ci­a­tion to wholly redevelop the main facil­i­ties at Edmonton Green and the neigh­bouring housing.

Edmonton Green is the most deprived ward in Enfield by most measures. It has the highest propor­tion of council housing of any ward, an ethni­cally diverse popu­la­tion and high levels of unem­ploy­ment and crime.

A footbridge that led to nowhere in the old shopping centre was made famous by Michael Crawford as a roller-skating Frank Spencer in an episode of the 1970s television sitcom Some Mothers do ’Ave ’Em.

The picture of Edmonton Tower Blocks as seen from near Williams Wood, Trent Park, Enfield, at the top of this page is adapted from an original photograph, copyright Christine Matthews, at Geograph Britain and Ireland, made available under the Attribution-ShareAlike 2.0 Generic Licence. Any subsequent reuse is freely permitted under the terms of that licence.