This is downtown Edmonton, focused around Edmonton Green, where Fore Street, Church Street and the Hertford Road meet 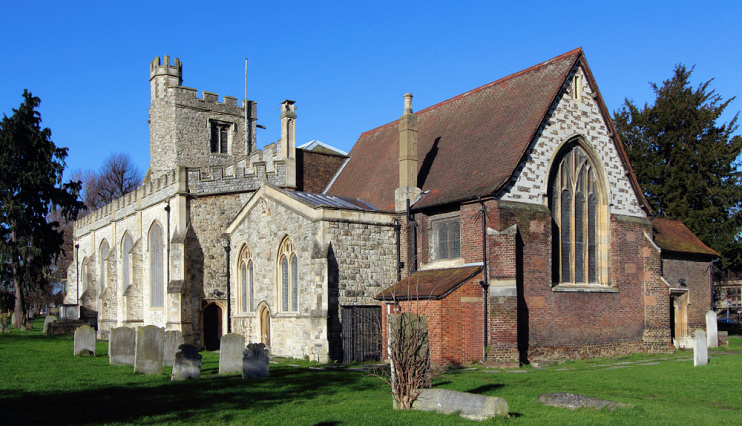 All Saints’ church (shown in the photo above) was in existence by about 1140 and the present building dates from the 15th century, although it has been altered almost out of recog­ni­tion since then.

By the late 18th century Lower Edmonton was the admin­is­tra­tive as well as the spiritual centre of the parish and a well-estab­lished settle­ment, although by no means large. There were 101 dwellings here in 1801. In the mid-19th century ribbon devel­op­ment along Fore Street linked it with Upper Edmonton.

Another branch line arrived in 1872 and Edmonton station was built, later called Lower Edmonton and now Edmonton Green. The second line was the more successful but even before the new station opened the railway had had an effect in Lower Edmonton; industry developed northward along the line, and the building of Liverpool Street station displaced thousands of City inhab­i­tants, many of who came to live here.

Extensive shopping facil­i­ties and a street market at Edmonton Green drew visitors from miles around in the late 19th century. Much of Lower Edmonton was built up with housing by the outbreak of the First World War and the process was completed in the two decades after hostil­i­ties ceased, closing the gap with neigh­bouring districts like Bush Hill Park.

After the Second World War Edmonton council and its Enfield successor compre­hen­sively rede­vel­oped what had become a run-down area, adding tower blocks in the 1960s. The 1990s saw a resur­gence in private house­building, espe­cially of small flats.

Lower Edmonton is a multi-ethnic community; the main groups being white, black Caribbean and black African.

The Latymer School operates a selective admission policy and is rated one of the best state schools in the country. Founded in 1624 on Church Street, the school moved to Haselbury Road (at or beyond the left edge of the map below, depending on your screen width) in 1910 and went co-educa­tional at the same time. Most of its pupils do not come from the immediate area and those that do are more likely to live in Winchmore Hill than Lower Edmonton.

The entertainer Bruce Forsyth was among the Latymer School’s alumni.

The picture of All Saints Church at the top of this article is minimally modified from an original photograph, copyright John Salmon, at Geograph Britain and Ireland, made available under the Attribution-ShareAlike 2.0 Generic Licence. Any subsequent reuse is freely permitted under the terms of that licence.