A superior Edwardian and interwar suburb focused on an agreeable village green, separated since the 15th century from Southgate to its west by the Grovelands estate 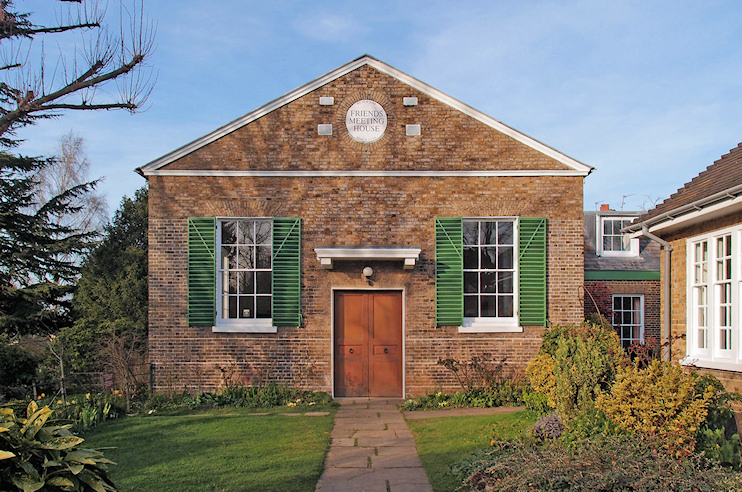 The origin of the Winchmore name is uncertain but it is probably a corrup­tion of a personal name (Wynsige) plus ‘mere’, which could have meant a boundary or a pond. The hamlet was first recorded in 1319, when its inhab­i­tants subsisted by coppicing oak trees or culti­vating assarted fields (fields cut out of woodland).

A Quaker community was in existence here by 1688, when a Friends’ meeting house was built. Shown in the photo above, the present meeting house replaced the original in 1790. The building is grade II listed.

By 1801 a thriving settle­ment had grown up around Winchmore Hill Green and on several of the roads that led to it, mixing elegant houses and weath­er­boarded cottages. A spa flour­ished briefly in the early 19th century after well-water was found to contain Epsom salts. St Paul’s church was built in 1827 and refur­bished after a fire in 1844.

The poet Thomas Hood came to live in Rose Cottage on Vicars Moor Lane in 1829 and his wife bore their third child here. Although the Hoods were not wealthy, their home was a grander affair than its quaint name suggests. The family moved to Wanstead in 1832.

A station opened in 1871 on the Great Northern Railway’s new branch line to Enfield Town.

Winchmore Hill had around 500 houses by 1882 but most of the landed gentry whose estates abutted the village could not be tempted to sell to the builders so there was little further devel­op­ment for the next two decades.

This hiatus was similar to the situation that prevailed in Southgate and Palmers Green, largely because they shared the same clique of landowners. But Southgate had no station at that time and Palmers Green lacked a picturesque core, so it was Winchmore Hill that grew faster and better when the great estates finally came onto the market in the early years of the 20th century.

In 1909 ambitious plans were announced to create a ‘woodland city’ at Winchmore Hill Wood but these came to nothing. When they ran out of green­field sites, builders bought up some early villas with spacious gardens and replaced them with groups of smaller prop­er­ties and by 1935 Winchmore Hill was almost entirely built up. Property spec­i­fi­ca­tions ranged from adequate to deluxe, reaching their apogee in Broad Walk. A conser­va­tion area covers much of the old village centre west of the railway line.

According to census data, the typical inhab­i­tant of Winchmore Hill is a home-owning, high-level manager in good health. Most residents are white British and the most numerous minority is of Greek birth or descent.

The picture of the Friends’ meeting house at the top of this page is modified from an original photograph, copyright Julian Osley, and the picture of Winchmore Hill Green is adapted from an original photograph, copyright Christine Matthews, both at Geograph Britain and Ireland, made available under the Attribution-ShareAlike 2.0 Generic Licence. Any subsequent reuse is freely permitted under the terms of that licence.
A public house has probably existed on the site of the King’s Head since 1700. The present premises were built in 1896.